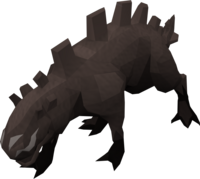 Corruption beasts are found in Nomad's Temple during the Nomad's Requiem. When a player kills one, their spirits are lifted and Prayer points are fully recharged.

The area they are in requires that you have Piety activated to stay alive for long so prayer boosting gear is highly recommended. These are sometimes used for training as players can maintain Piety and Protect from Melee since their prayer is recharged upon killing one. This method has been found to give a maximum amount of 50k experience per hour. The downside to this method is that the player is forced to not complete the quest for as long as they wish to use this method, as access to the temple is lost upon completing the quest.