From the RuneScape Wiki, the wiki for all things RuneScape
Jump to navigation Jump to search
For the farm animal, see Corpse spider (player-owned farm). 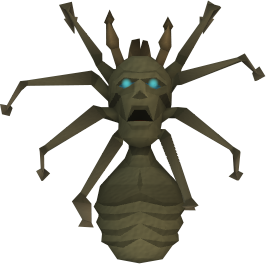 Corpse spiders are arachnids found in the second room of the Lumbridge Catacombs, which can only be entered after completing The Blood Pact quest. They were created by Dragith Nurn, a now undead necromancer, during his experiments with stolen corpses and local animals. Because they used to be humans, they have a human face on their back. It is the only spider to drop bones, likely due to their human components.

They drop the mask part 2, which can be used with the 4 other parts to create the Mask of Dragith Nurn.

Corpse spiders are often killed for invention materials using the scavenging perk due to the ability to kill many of them in a short period of time.

Drop rates estimated based on 9,700 kills from the Drop Log Project, unless otherwise cited.

The average Corpse spider kill is worth 787 coins.