From the RuneScape Wiki, the wiki for all things RuneScape
Jump to navigation Jump to search
The Old School RuneScape Wiki also has an article on: osrsw:Cormorant
Cormorant? (edit) 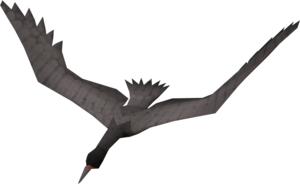 Cormorants are a species of large bird native to the tropical jungle island of Karamja. They can be found on the island's north-eastern portion, in the open strait between the island's southern portion and Musa Point. They feed on fish and other small sea-dwelling creatures on the coast. Cormorants, unlike most birds, cannot be fought or interacted with in any way, essentially making them scenery.

Cormorants are carnivores, feeding on the abundance of fish native to Karamja's shores. They are amongst Karamja's largest species of bird, surpassed only by the dangerous Oomlie bird and the massive Karamja Jungle eagle. Although large and dangerous, it is known to share hunting grounds with other birds, including seagulls that are known to inhabit the area.

As of 12 April 2010, Cormorants can now be found at the barge landing on the eastern side of Daemonheim, including the resource dungeon on the north side. They can often be seen flying around the shores north of the Slayer Tower.

This information has been compiled as part of the update history project. Some updates may not be included - see here for how to help out!
Retrieved from ‘https://runescape.wiki/w/Cormorant?oldid=35697660’
Categories:
Hidden categories: