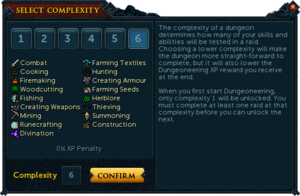 The interface for selecting the floor complexity

Complexity is a game mechanic important in the Dungeoneering skill. Once they have unlocked a complexity, players are free to select it when training the skill.

Slayer is used in all complexities, but is far more common in complexity 6.

The complexity selected determines the variation and experience earned within the dungeon. Each complexity level contains the features of those below it and an addition feature. The following table shows the different complexity features.

Skills available are Magic, Ranged and melee combat (Attack and Strength), as well as skills applicable to all three styles (Constitution, Defence, Prayer). Armour and weapons are provided (the type depends on your levels in Attack, Ranged and Magic, and seems to be the highest tier of items you can use minus two, with a minimum of one). There is a 50% XP penalty. Gatestones and the Smuggler's shop are not available at Complexity 1.

Additional skills include Cooking, Firemaking, Fishing, Woodcutting. Armour and weapons are provided. There is a 45% XP penalty. It is not recommended to do Complexity 2 if higher complexities are available. The Smuggler's shop is available at this complexity, however minimal stock is available.

Players may now use the Mining and Runecrafting skills, as well as Fletching and smith weapons; armour is provided. There is a 40% XP penalty. It is not recommended to do Complexity 3 if higher complexities are available.

The farming textiles and Hunter skills are now available. Players may also smith armour. There is a 35% XP penalty.

At Complexity 5, all but one of the skills are available, including Construction, farming seeds and Summoning; the only skill not available on this complexity is Divination. There is a 30% XP penalty. At Complexity 5, the Smuggler's shop contains full stock. Puzzle rooms and skill doors are also available.

Within a complexity 5 dungeon, every room, other than the boss and starting room contains at least one thieving chest, useful for easier completion of the floor and provisional of a substantial amount of Thieving xp, up to 800xp per chest, providing up to around 10k Thieving xp for a small dungeon, assuming every chest is looted.

Unlike Complexity 5, you will get no XP penalty when you complete a level on this complexity. In this complexity, wisps will spawn randomly for Divination, and puzzles are far more common.

At Complexity 6, the Smuggler's shop will also have a full stock of items.