Commander Zilyana is the commander of Saradomin's forces in the God Wars Dungeon. She shares the same combat level but has different amounts of life points and max hits as the other God Wars generals. She has very high life points, only surpassed by Kree'arra and Nex. She also has the highest attack speed out of all of the god war bosses (attacking every 1.2 seconds) and has a max hit of 2200 with her magic and melee attacks, which combined with her fast attack speed, may prove fatal for inexperienced players.

Zilyana is known for dropping the Saradomin amulets, which with a chaotic remnant, can create more powerful amulets. Her best drops, however, are the Saradomin hilt and off-hand Armadyl crossbow which are very expensive. The hilt is used to create one of the most popular godswords for players.

Prior to fighting Zilyana, it is recommended that players who have completed Ritual of the Mahjarrat quest visit the Glacor Cave to receive a 5% damage boost from the effect of the Stone of Jas. This can be done via the Fairy ring code DKQ. 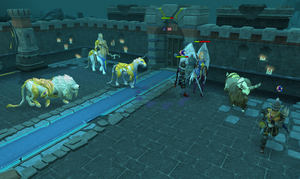 A group of players fight Commander Zilyana in the God Wars Dungeon.

Zilyana only has two different styles of combat. Like General Graardor and K'ril Tsutsaroth, she only uses her secondary combat style in melee range. Both attacks have a max hit of 1900.

The player has the option to choose between the normal room and an instanced room; both strategies are applied here. If a player uses an instanced room, it will cost them 200,000 coins per hour, but if the player dies they can recover their items without being barraged by attacks.

Since many of the items dropped have a good high alchemy value, it is possible to bring a Steel titan or Iron titan and spam scrolls rather than bringing a Beast of burden. Also a Spring Cleaner 2000 or above with High Alch Rune Salvage reduces space requirements.

Zilyana's guards drop monkfish and Summer Pie often so little food is required if using Soul Split and or an Enchanted Excalibur. Magic Notepaper/Enchanted Notepaper is helpful if you wish to pick up the potions that are dropped by Zilyana and her guards.

If Adrenaline Stalling, it's easiest to leave one guard alive until you've picked up all the drops.

The Ancient Elven Shard is helpful if using a curse such as Torment with Soul Split for faster kills.

One of the popular ways to kill Zilyana is with a spell with high-levelled magic equipment, as it provides decent magic and melee defence, which will ward off her attacks better. When using magic to kill Zilyana, players are recommended to stay on the western side of the room, one space away from the middle of the wall. This is because when she spawns, Growler is within range of Dragon Breath and players can kill him while they are killing Zilyana also. Players are recommended to save up adrenaline for Sunshine, otherwise kills will take too long and end up with shorter trips. When Zilyana and her guards are killed, return to the spot again to repeat for the next kill. Occasionally, Growler may spawn one square too far or close to the player's spot. If he spawns too far, simply use Chain to damage him; if too close, move back one square so he can be attacked with Dragon Breath. Caution: Blood spells from the Ancient magicks spellbook will enrage Zilyana, increasing the damage of her own attacks.