From the RuneScape Wiki, the wiki for all things RuneScape
(Redirected from Combat style)
Jump to navigation Jump to search
The Old School RuneScape Wiki also has an article on: osrsw:Combat Options
This article is about the different statistical boosts offered by fighting in certain ways. For the various ways to attack in combat according to strengths and weaknesses, see Attack types. 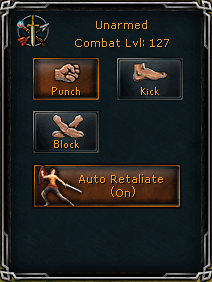 Before the Evolution of Combat update, the combat styles used in the game were a big contrast to the current system. The combat style that a player used in combat were divided into various categories, each giving specific experience in either one skill or shared across many. These styles could be chosen via the combat screen section of the interface.

To view the Evolution of Combat equivalent of this page see Combat Experience.

Melee weapons varied in their attack styles. Most weapons had four options to choose from, as in the example shown above, where each style had a different performing action and was categorised into the following types:

While wielding a Magic weapon (commonly a staff), a player can use the Autocast option, which makes the player automatically attack with a selected spell.

The spells a player can automatically cast are chosen from a list which varies with each spellbook. While a player has the autocast option chosen, they could also choose between two styles to represent how they are casting their magic: defensive or aggressive stance.

Along with weapons giving experience exclusively in melee, magic and ranged, there is a class of weapon which gives experience in a choice of either Strength, Magic and Ranged - Salamanders.