From the RuneScape Wiki, the wiki for all things RuneScape
(Redirected from Combat stats)
Jump to: navigation, search
This article is about the meaning of the bonuses. For a tabulation of values, see Equipment tables. 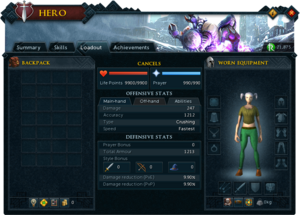 Equipment bonuses are highly important to certain aspects of RuneScape such as player killing in Wilderness and fighting in the Duel Arena.