From the RuneScape Wiki, the wiki for all things RuneScape
Jump to: navigation, search
The Old School RuneScape Wiki also has an article on: osrsw:Combat ring
Required materials:

A combat ring can be built in the Combat Room of a player-owned house. In a combat ring, per its examine info, anything goes. All weapons, armour, jewellery, and spells (with the exception of teleportation spells) are allowed. It should be noted that the spikes surrounding the combat ring are for decoration and do not inflict any damage should someone run into them.

Combat rings are often used for power levelling stats, as it is very easy to access. Mages with the Ancient Spellbook can use spells that target multiple people, who generally wear nothing or melee armour, and can inflict very high amounts of damage very quickly to multiple people. Players respawn outside the ring, and they can re-enter the ring immediately, allowing for very fast training of combat stats.

Also, in the Duel Arena, all stats are restored to normal before the duel starts; fighting in the combat ring can be more economical due to the fact that potions can be used for more than one fight, allowing larger amounts of damage for longer amounts of time, since the stats are not reset. 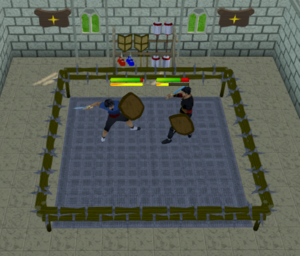 Players fighting each other in a combat ring.

This information has been compiled as part of the update history project. Some updates may not be included - see here for how to help out!
Retrieved from ‘https://runescape.wiki/w/Combat_ring?oldid=35234941’
Categories:
Hidden categories: