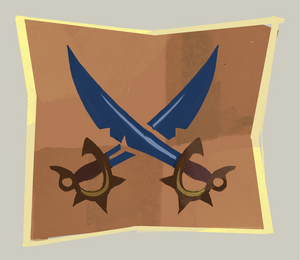 Artwork of the item.

The combat beta contract is an item that was added to players' inventories on 1 June 2012. It was a means for members to sign up for the Combat Beta. Upon clicking it and accepting the invite, the player would be directed to the RuneScape website in a new window or tab, where they are prompted to enter their RuneScape username and password for verification. Once signed up, an invitation was sent to that person via email on 26 June. After the end of the Combat Beta, the sign up page now redirects to the combat page on the official RuneScape wiki.

Full access to the beta was made automatically available to players who had been a member for at least 12 consecutive months prior to the release of the beta contract item. Many active users also received beta invites and were able to register and enter, along with the aforementioned members, totaling a maximum of 50,000 testers during the period in which it was limited as such. All members got access to the Beta at afterwards, rendering the combat beta contract obsolete.

If one logged in with a full inventory, removing an item and re-logging allowed the contract to show up. This item cannot be re-obtained if destroyed; however, players could still sign up on the RuneScape website if the contract was lost. Free-to-play players could receive this item although it would be unusable. Because it is a members item, it is banked using members slots.

Use of the combat beta contract resulted in the pop-up message:

Congratulations! As a highly valued member of our community you are automatically eligible to take part in the Evolution of Combat BETA.

On the 26th of June you’ll be able to login to the BETA servers to take part!

Return to the Combat HQ for more information and updates and we’ll see you on the 26th!

This information has been compiled as part of the update history project. Some updates may not be included - see here for how to help out!
Retrieved from ‘https://runescape.wiki/w/Combat_beta_contract?oldid=35687179’
Categories:
Hidden category: