From the RuneScape Wiki, the wiki for all things RuneScape
Jump to: navigation, search
For this item's augmented variant, see Augmented Balmung.
For other variants of this item, see non-cobalt, achromatic, viridian, crimson.
Cobalt Balmung? (edit)

The Cobalt Balmung is a reward for completing the miniquest Koschei's Troubles. It can be changed into the Achromatic Balmung by right clicking and selecting the "Toggle-colour" option. 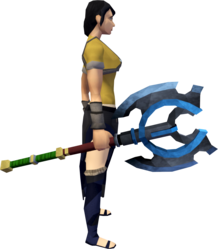