The closed chest is a locked chest located in the Agility Dungeon in Yanille. It is in a part of the dungeon that requires 49 Agility to access. The chest can only be unlocked with the sinister key, which is a drop from Salarin the Twisted or a possible loot from a magpie impling jar/magpie impling. If opened, the chest will emit a toxic gas, which poisons the player starting at 62 life points, so it is advised to bring an antipoison or other method of curing or preventing poison.

Opening the closed chest yields a profit/loss of 4,754 coins per sinister key. 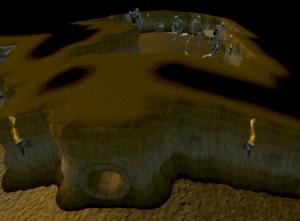 Where the chest can be found.