Clock Tower is a quest that takes place in the Ardougne Clock Tower. The tower's mechanism has stopped working, and you are asked to retrieve its missing parts from the dungeons.

After starting the quest, players will not be able to obtain a watch from Brother Kojo until the quest is complete – if it is needed for a Treasure Trails clue, talk to him beforehand.

Talk to Brother Kojo at the Clock Tower, just south-west of the Ardougne Zoo. He informs you that the clock is broken and that four different coloured cogs are needed from the dungeon below the tower to fix it.

Climb down the ladder in the south-western area of the room. Go up the passage to the north-east until you see four large coloured tiles on the floor. These tiles will indicate where the corresponding coloured cogs are.

Only one cog can be carried at a time, so fix each cog onto its spindle before going for the next. 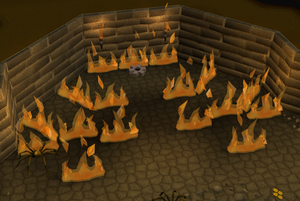 The location of the black cog

Head through the door closest to the black tile, which should be the north-east door. Walk through the doors and go as far east as you can until you see several giant spiders.

You'll see a black cog surrounded by some short walls of fire; use your bucket/jug/bowl of water to cool down the cog. If you have ice gloves, you can directly pick it up without dousing it with water.

After getting the cog, go back to the ladder where you first entered, but don't climb quite yet. You should see 4 spindles near the ladder; use the cog on the black spindle pointing east. 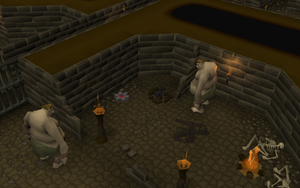 The location of the red cog

From the central chamber head past the south-east door, closest to the red tile, and down the passageway until you see some level 67 ogres and the red cog. The ogres have low accuracy, so you can quickly run and pick it up.

Go back up the ladder where you came in from and use the cog on the red spindle on the ground floor[UK]1st floor[US]. 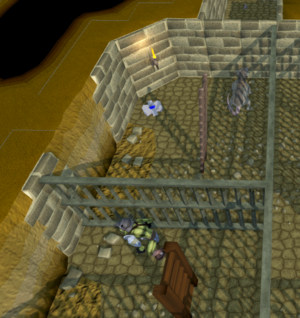 The location of the blue cog

The blue cog is locked inside a cell with a dungeon rat; you need to find a way to get at it. Climb back up to the surface and head to the southern zoo boundary, where you'll notice a ladder south of the camel cage, just outside of the Ardougne Zoo. Go down the ladder and follow the long, winding passage until it ends at a wall.

Push the wall to get inside and pick up the blue cog. To save time, climb up the ladder that's already there and you'll find yourself south of the clock tower. Back inside the tower, climb up the stairs and use the cog on the blue spindle on the 1st floor[UK]2nd floor[US]. 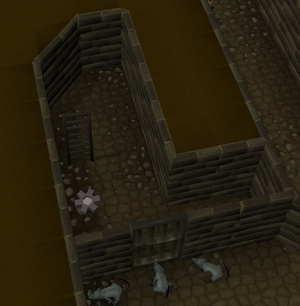 The location of the white cog

Head into the north-west door in the central chamber, closest to the white tile and follow the outer passageway first until you find some rat poison. Pick the poison up and head back around to the passage that goes north-east. You should pass by 2 levers attached to a metal cage filled with dungeon rats. Pull them both up to open the cage.

Pass the gates into the cage, and use the rat poison with the food trough; the vermin will eat the poisoned food and begin to die. Wait until they're all dead, and you'll find that the gate to the west has become unhinged due to the constant collision of the panicking rats. Go through the gate, pick up the white cog and use the ladder nearby to end up outside of the clock tower. Climb to the topmost floor and use the white cog with the corresponding spindle.

Once you've placed all of the cogs in their corresponding spindles, go back to Brother Kojo, who rewards you for your efforts. 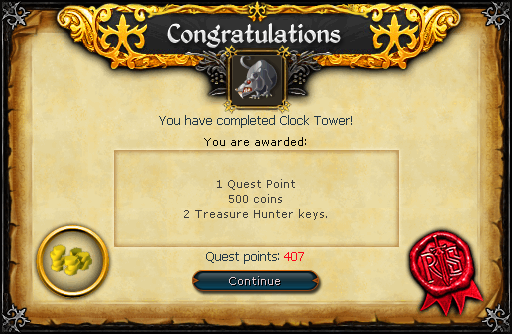 Clock Tower is not currently required for any quests or miniquests.