From the RuneScape Wiki, the wiki for all things RuneScape
Jump to navigation Jump to search
This article is about the character found in Varrock Palace. For the Witchaven resident encountered during Kennith's Concerns, see Clive.

Clive is a character found in Varrock Palace, the military hub of Misthalin's capital city Varrock.

Clive is a well-dressed nobleman from East Ardougne, the capital of Kandarin. He snubs the player, saying "One does not normally talk to peasants".

Clive first appeared in the game on 29 September of 2008, along with the release of Defender of Varrock. During the quest, he can be seen hiding in a bedroom while armoured zombies engage in the Battle of Varrock Castle. Despite his appearance on the day of the quest's release, he does not play a direct role in the quest.

Clive plays a role in the first of Meg's cases, Clive's Runaway Rabbit where players must help track down his missing pet bunny Bouncy by pursuing clues left in Varrock Palace. 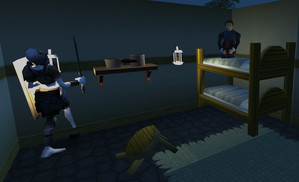