From the RuneScape Wiki, the wiki for all things RuneScape
Jump to navigation Jump to search
For the first boss of the Temple of Aminishi, see The Sanctum Guardian.

Clawdia is a boss monster featured in the Summer Beach Party, in the centre of the Lumbridge Crater. She is a large crustacean that appears once every hour at the 45 minute mark, signified by a start of rain in the area. If she is not defeated after 5 minutes, she will retreat. Rewards are still granted to players who have attacked her before that time.

Clawdia deals damage in all attack forms from 1-10% of the player's current life points. All of her attacks will hit in an area-of-effect, damaging players near her target. She has 5 attacks:

Clawdia has the following attack pattern:

Deaths to Clawdia are not safe, meaning items are lost upon death and Hardcore Ironman Mode players will lose a life. However, since Clawdia does damage according to your current health, it is very difficult for her to kill you.

It was possible to defeat Clawdia more than once per hour by switching worlds, but with the Beach's return in 2016, players can only receive drops from Clawdia once per hour, and only one kill per hour counts towards the title. Clawdia despawns in 5 minutes if not killed, but players who have engaged her in combat will still be rewarded.

Before the event when players could hand in sand one possible dialogue has Reyna noticing a small crustacean in one of the buckets. During the event, she states to the player that Clawdia arrived at the beach in one of the buckets of sand donated, then an "adorable little creature". The Wizards' Tower believes that the Anima Mundi appointed Clawdia as one of its defenders to retaliate for the battles that have happened in the area, most notably the Battle of Lumbridge.[1]

Clawdia plays a small role in Gower Quest, appearing in at the Behind the Scenes bar. Attempting to talk to her will bring up a message that she cannot talk as she was never given a chathead.

It is not possible to attack Clawdia with a deathtouched dart.[2] 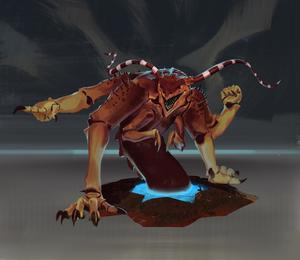