From the RuneScape Wiki, the wiki for all things RuneScape
(Redirected from Clan camp)
Jump to: navigation, search

The Clan Camp is used as a base of operations for clans and is located south west of Falador, east of the Crafting Guild, opposite the farm and next to the wall south of Falador. This is the location where clans can officially be registered, hold meetings, and recruitment drives.

Within the day of release on the 12th of April 2011, more than 250,000 players had pledged their allegiance to a clan using the Clan Camp. According to Jagex, there were over 33,000 new clans formed within the first 24 hours of release. After posting this information on their Facebook group, the number was changed from 33,000 to 47,000 15 minutes later. [1]

If a player is not a founder or member of a clan, they do not have access to some of the features NPCs have to offer.

To start a clan, players can talk to the Scribe, and ask him about starting a clan. After some dialogue, he gives the player a clan charter, which must be used on 4 different players (not including the player themselves).

After getting the signatures of four players, the player must use the scroll on the scribe once more with all 5 players present. They can then choose a name for their clan. Once this is completed, players can now add up to 500 players to their clan, and their clan will be included in the Clans page on the official website.

The Clan vexillum can be edited by going to Clan Settings and clicking Motif. Players can choose 2 out of 120 motifs available. Colours can be customised for each motif.

To recruit players into a clan, a Clan Recruiter (A clan member that has the 'recruit new clanmates' permission in the clan settings) will have to click on the 'invite'

button in the bottom-left corner of the clan chat interface and then on the player. The receiving player can then either accept or decline the invitation. If they accept, they will be added to the clan with the 'recruit' rank.

In the eastern part of the camp, there is a mass of Vexillum stands. They are placed in a middle circle and in various locations near the circle. These stands can be used to place Clan vexilla as a way of advertising your clan and recruiting new clanmates. There is a total of 36 stands in all of RuneScape.

At the northern portion of the Clan Camp, there is a stone noticeboard where information about clan activities and events can be obtained. Up to eight separate events can be listed, with one event at a time appearing on your vexillum.

One of the key features of the camp is a Clan meeting tent which can be used as a public or private lobby for Rated Clan Wars. This is presumably intended as a convenient battle planning location. It is also used for Clan meetings for other things, like deciding about admins. It has a Vote box in which you can start a Yes/No Vote on whatever you want and a lectern for inviting other clanmates that happen to be in the Camp at the time. 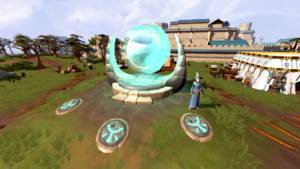 The Clan Portal in the Clan Camp.

The newest feature to the clan camp is the portal to the Citadels. The portal is in the western part of the Clan Camp. This can take you to your clan citadel, another clan's citadel, or view a flythrough.

Avalani is a mage responsible for creating a safe passage to the Clan Citadels. She can be found next to the portal, as well as in all Citadels. She is notable for causing chicken appearances all over Gielinor, as they are test subjects for her unfinished portal. She also played a central role and was the starting point of the Cryptic Clue Fest III. In the Citadel, she gives information about clans, handing out Citadel handbooks. Speaking to her in the Citadel unlocks the achievement "A Wizard Did It".

The Scribe, Amos Twinly, is located in a tent in the northern most part of the Clan Camp. He can provide players with a Clan charter, which can be used to recruit clanmates. To officially found a clan, players need their name and the names of 4 other co-founders on the Clan charter. All founders must be online and in the Clan Camp vicinity to have their names count. Along with that, he can also provide players with a Clan vexillium.

The ill-tempered sergeant teaches players about Rated Clan Wars, giving out rated clan war badges and rated clan wars rulebooks. She says that she once fought in the Siege of Falador.

Captain of the Guard[edit | edit source]

Main article: Captain of the Guard

The captain, whose name is Alf A Numerius, gives out Clan cloaks to players who are in clans. He tells players that all he does is give out cloaks and make sure others do their jobs. He refers the player to the Scribe for more information on clans. He also constantly makes romantic advances on the Sergeant-at-Arms, who in denies his advances.

In the days leading to the release of Clan Camp, some multi-clanning players (those who belong to multiple clans at once) were disrupted or upset by the limitation of one officially registered clan per player. Players who had been part of two or more communities for some time were faced with a choice between joining just one clan or not using the new clan features at all, and therefore not being officially recognised as a clan. For this reason, some felt that the update was discriminatory against multi-clanning players. Threads appeared on the RuneScape Forums [2] lamenting this, as well as the fact that the update seemed to be mostly aimed at competitive player-vs-player clans, ignoring the needs of non-competitive, friendly clans. Jagex Moderators responded, saying that the limitation on multi-clanning is a technical issue that was too hard to fix.