The clan avatar is a members-only pet available for clans. They were first announced in the 2012 August Behind the Scenes news post. Avatars are made out of elemental forces. They used to provide buffs but this feature was replaced by the Avatar control stone.

In order to use a clan avatar around the surface world, an avatar habitat must be built for them, which come in basic, medium, and grand forms. The resource requirements to build habitats are:

If the citadel becomes dilapidated, the avatars will become inaccessible. 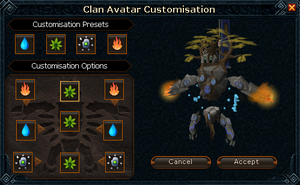 Each of the nine parts of an avatar may incorporate any of the four elements—earth, water, fire or air. Each avatar requires a head, as well as an upper and lower body, while the other parts are removable.

To customise an avatar, a clan member must first be granted the Customise Avatar permission in Clan Settings. They may then interact with the Avatar Control Stone in the citadel and customise it from there. 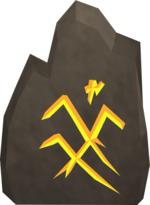 Any clan member may summon the avatar from their pet interface via the Follower Pets tab.

Prior to an update on 30 July 2018, to summon a clan avatar, a clan member must have held a rank of Administrator or higher and must have been assigned the Avatar Warden job through Clan settings, under Clanmates. Clans could not have more than one avatar summoned in any game world, however multiple avatars were able to be summoned in their citadel.

Buffs may be activated per clan member by interacting with the Avatar Control Stone and selecting Activate your weekly buff. Players can only have one weekly buff activated at a time, however they may change their active buff at any time. After the update on 30 July 2018, players no longer need to have the clan avatar summoned to gain buffs, and instead can activate the buff via the avatar control stone.

The Avatar Skilling Buff stacks with the following:

The Avatar Skilling Buff does not work with the following:

The clan citadels were originally the flying fortresses of the aviansie, so Armadyl would have had his throne up there somewhere. Since the magic of the citadels is Armadyl's, it makes sense that the avatars are made by Armadyl too! Hope that makes sense.

Clan avatars can also collect in the Citadel when summoned as a familiar. The resource gathered by these can be selected by a clan member with the rank sufficient to change this rank. To do this, if you have the rank interact with the Avatar Control Stone, select the Gather resources option and select the desired resource you wish the avatars to collect. Once set to gather, they will only continue to gather anywhere in the citadel except the Battlefield.

The amount that avatars have gathered can be viewed in the clan log viewed by those with the required rank by right clicking the clan information button.

Originally, the avatar occupied the follower slot. They could be summoned from the avatar habitat by an avatar warden, a clan job restricted to administrators. The buffs only activated when the avatar was summoned and required the player being on the same world as the warden with the avatar, and required a weekly payment of 300 anagogic orts. Additionally, avatars were larger and could be clicked on by members not associated with the appropriate clan. Additionally, there were seven buffs available - Skill Plot Bonus, Skilling Bonus, Heal Over Time, Familiar Faces, Auto Ort, Random Resurrection, and Protector.

Heal Over Time healed clan members within range of the avatar for 2% of their maximum lifepoints every five seconds.

Auto Ort had the avatar collect anagogic orts and deposit them in the player's inventory.

Random Resurrection had the avatar resurrect a player upon death. It could only be done once per day per player and the number of clan members who could benefit depended on the citadel tier.

The avatar took 5.2% of all damage, including typeless damage, dealt to a clan member in range of the avatar.

Skill Plot Bonus originally only boosted resource collection by 10% and Skilling Boost gave 3% bonus experience to clan members on the same world, doubling to 6% for those within range of the avatar.

The option to recall avatars was also added. This allowed clan members of the appropriate rank to remove avatars from wardens, such as if they had logged out without first dismissing the avatar. 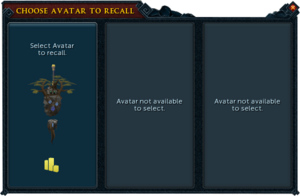 On 30 June 2018, the avatar was converted to an interface follower. Additionally anagogic orts and several underused buffs were removed, and the Skilling Boost perk changed to depend on a clan member's contribution to the citadel - 3% base experience boost, with an additional 1% boost per fealty.

Originally clan avatars can also collect in the Citadel. To do this interact with the Avatar Control Stone and then select the Gather resources option. They collect whichever resource is assigned to it, at one ninetieth of resource cap per 45 seconds (i.e., [1/90] * resource limit). There is a resource cap, the same amount as clan members for the clan's Citadel (e.g. 2000 for Tier 5 storehouse, 2350 for Tier 6, and so on). Once set to gather, the Avatar will continue to gather anywhere in the citadel except the Battlefield. 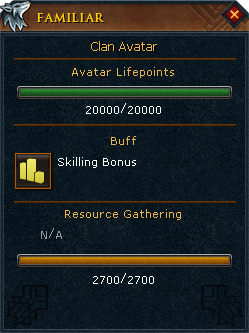