From the RuneScape Wiki, the wiki for all things RuneScape
Jump to navigation Jump to search
The Old School RuneScape Wiki also has an article on: osrsw:Clan Wars
For the music track, see Clan Wars (music track).
Not to be confused with Rated Clan Wars.

Clan Wars is a minigame available to both free players and members located in the Gamers' Grotto. It was released on 10 December 2007 as compensation for the controversial Wilderness and PKing changes. Clan Wars allows members of two opposing Friends Chat channels (formerly referred to as Clan Chat channels), consisting of up to 100 players each, to engage in player-versus-player combat against one another. There are many in-game clans who focus heavily on Clan Wars, but these clans often require their members to have high combat levels.

Each "clan war" is begun with conditions of victory and item safety set by the clan leaders prior to the start of battle. Depending on the settings chosen, it is possible to lose all items upon death during this minigame, but most wars are fought in a "safe" mode.

Alternatively, players can use the White or Red portals, which allow free-for-all combat.

Clan Wars received a major expansion on 9 September 2008 with the addition of new fighting options. These included "calling", a new messaging option, and new arenas/maps. 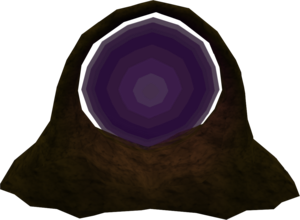 This portal is the main portal, leading to arenas used for organised clan wars. For a discussion of techniques of fighting, see Strategies and Tips.

For engagement in the Purple portal, players who wish to be on the same team have to be in the same Friends Chat. Although the term clan is used frequently, it doesn't matter in which Clan players are. This happened because formerly Friends Chats were called clans and the current clans didn't exist.

Players who wish to fight with their clan against another clan might try a similar minigame, Rated Clan Wars, which is located in the Clan Camp.

Some options regarding combat

Once the challenge has been accepted, and the conditions have been agreed upon, the challenging player and the accepting player will be teleported into the arena. All other players logged into the respective Friends Chat channels are notified of the initiation of hostilities in two minutes time. Players must click on the purple portal to enter the battle, where they will be presented with the terms of engagement and the option to either participate in the fight or watch from the sidelines.

There is a two minute countdown whenever a purple portal battle is started. The only two ways out of a dangerous purple portal fight are to either, leave the friends chat, or to run out via the portals on each end of the field. There is NO way to prevent players from exiting the purple portal at any time. Battle can not take place before the two minute timer has hit 0:00, and the wall has dropped. The portal is not dangerous until the two minute timer has elapsed. If someone who isn't a member of a Friends Chat (or is a member of a Friends Chat that isn't involved in a war) tries to step through a portal, they will be able to choose from three options:

Waiting for battle...
As the battle starts, the music flows over into Clan Wars

The free-for-all (safe) portal was added as part of the Clan Wars Update of 9 September 2008. Usually referred to as FFA, or White Portal, it is a safe, free-for-all combat arena is found when entering the portal. If a player dies within this arena they will not lose any of their items.

A strip of land on the south edge of the arena (including the exit portal) is designated as combat-free. Players may prepare here for a fight or recruit others into their clan. North of the area spans a single-way Combat zone. Heading further north is a multicombat area and large clans (often found wearing specific team capes) sometimes choose to assemble wars here. This is probably the most popular portal, as items are not lost on death.

The unofficial world for safe free-for-all is World 3 (F2P).

The free-for-all (dangerous) was added as part of the Clan Wars update of 9 September 2008. A dangerous free-for-all combat arena is found upon entering the portal. If a player dies while in the arena, they will lose all items equipped and in their inventory, unless the Protect item prayer is in use. There are no gravestones in the dangerous arena, so items cannot be retrieved.

A strip of land on the south edge of the arena (including the exit portal) is designated as combat-free. Players may prepare here for a fight or recruit others into their clan. The Wise Old Man stood in the Challenge Hall about a week after the update, announcing that there would be no more gravestones in the Dangerous FFA arenas.

All items a person has on death now shows up as loot for the killer, just as it is in the Wilderness.

Teleporting out of this arena is blocked.

Since the 9 September 2008 update, there are five Clan Wars arenas and a Free-for-all arena. Each arena offers a different type of landscape that gives different combat styles and different war strategies an advantage. 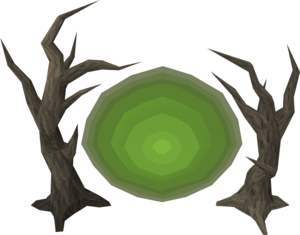 There are many capes that can be worn to distinguish clans. When a wilderness team cape is worn, anyone who is wearing that cape will appear blue on the mini map. These capes can be bought from sellers scattered throughout the wilderness.

However, it is not necessary for clan members to wear team capes or add each other for easy friend and foe identification since the game will automatically identify all clan members as purple dots on the minimap.

Most members simply wear the custom capes they were given after the 12 April 2011 update. Clan mates appear as orange dots making them easily distinguishable; and with this method Clans can finally fight under their own colours.

Your clan is victorious!
The victory tune 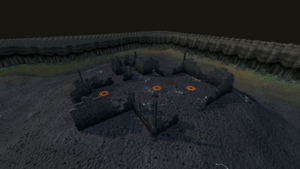 The Demonic Ruins lookalike in the Free for all clan wars arena
Retrieved from ‘https://runescape.wiki/w/Clan_Wars?oldid=35826864’
Categories:
Hidden categories: