This tab shows the members that are in the clan along with their rank level and online status. Players on this list are shown in green if they are online and on the same world as the player viewing the list. Players shown in yellow are online at the time, but are on a different world than the player who is viewing them. The rest are currently offline, or not currently in the clan chat.

By clicking the button beside the rank symbol of a user, clan members can view the jobs of that user as well as their rank level. Players who are ranked admin or above can use this window to change the rank level and job title of the user, as well as whether or not the user is banned from the Clan Citadel, Clan Keep or the Citadel Island, or prevented from talking in the Clan Chat. Admins can also kick a player from the clan using this window (see below). 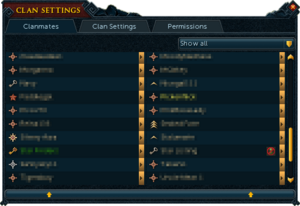 The 'Clanmates' tab of the clan settings interface. The players on the same world as the viewer are shown in green, and online players are shown in yellow.

Anyone with the appropriate permission can kick other clan members that possess a rank lower than themselves from the clan. This will cause the clanmate to lose their progress on the clanmates list on the clan hiscores. They will also lose their Clan Cape, Clan Vexillum and any Orts they hold and be ineligible to skill in the Clan Citadel for a week, if recruited again. Kicked clan members can rejoin the clan immediately, or join another one.

Ever since the Demon Flash Mobs update, clan admins are restricted to kicking two clanmates per day. This restriction was implemented to prevent rogue or hi-jacked leaders from removing mass numbers of members. 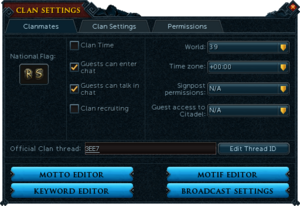 The settings section of the clan settings interface

This tab lets players ranked admin or above change the general settings of the clan. All other members of the clan can view these options, however. 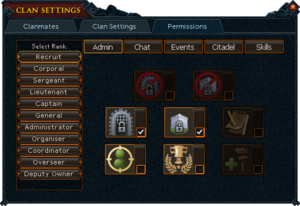 The permissions tab of the clan settings interface

The permissions section in clan settings allows players ranked admin or above to change what specific rank levels are allowed to do within the clan. In order to grant or remove a permission for a specific rank, three conditions must be met:

The permissions are split into five categories, which are displayed along the top of the interface:

This category includes the administration permissions for the clan. These include:

This category is for permissions relating directly to the Clan Chat . The permissions include:

Permissions relating to clan events are stored in this category. These include:

This contains permissions relating to the editing and building of the Clan Citadel . These permissions include:

This category contains the permissions relating to skilling within the clan citadel. These include:

These permissions are "hard-coded" in the clan system and cannot be modified by clans. They are not visible on the permission interface.

Any player can click this button to permanently leave the clan they are in. They will be presented with a confirmation box if they press this button. By doing this they will lose their rank in the clan and a clan member with the "Ability to recruit" permission will need to recruit them back into the clan again.

If the player wishes to join another clan, they will have to wait 1 week for citadel attendance, and 2 weeks for citadel quartermaster bonus and fealty rewards. 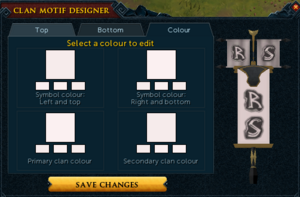 By pressing the 'clan motif' button at the bottom of the clan settings tab, as mentioned in the previous section, an interface is displayed which allows players to choose what their official clan symbol and colours are. Any player ranked admin or above can choose the two symbols that will appear on their clan's cape, vexillum and along the top of their clan's page in clan home. They can then choose the colour for the two symbols using a colour selecting interface and the two colours that will appear in the places mentioned above. However, the Motif will not appear unless there are five members in the clan. 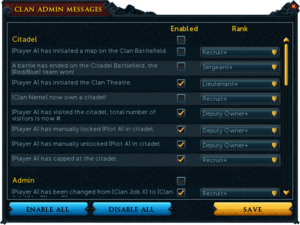 An example of the Clan Broadcast Settings.

A clan can toggle a variety of messages, which, when triggered, will be broadcast to the clan members with a high enough rank to view that message. The rank or toggle for each message can be set by any rank of admin+ with the Edit-broadcast permission.

Players can have their achievements broadcasted to their entire clan, regardless of what world they are on. The settings for this can be accessed under Clan Settings, and then Clan Broadcast Settings. It allows changing the broadcast visibility - whether or not all messages should be broadcast, some, or none - and whether clan chat guests can see the messages.

Clan members with the rank of

Overseer and above can set a clan login message, which is sent to clan members upon login (once every 6 hours).

When editing their clan symbols and colours, the admins (or higher ranked members) can select 2 of 126 different logos to put on their clan capes and vexillums. These logos range from letters, numbers, skill symbols, god symbols, animals, and more. Over time Jagex has held several clan experience competitions which offered the winning clans to have their own custom logos added to the list.

This information has been compiled as part of the update history project. Some updates may not be included - see here for how to help out!
Retrieved from ‘https://runescape.wiki/w/Clan_Settings?oldid=35686183’
Category:
Hidden category: