Civil War III (miniquest) is the third and final miniquest in the Legacy of Zamorak storyline concerning the Zamorakian Civil War. It is a requirement for the tier 5 upgrade of the Infernal Puzzle Box.

Anne Dimitri will claim to have an update for the player, but she'll rescind on it saying she doesn't have anything yet. She instead asks the player to do a personal favour for her, which is to assist with some druids who are investigating a garden in the Kharidian Desert. The player agrees, and is told to talk to a druidess named Polletix.

Polletix will explain the druids' attempts at analysing herbs and plants grown in the area, as well as outside the desert. The player will volunteer to do some herb farming to collect Crux Eqal favour. This can be done by harvesting fully-grown herbs of any kind from any of the herb patches across Gielinor, including the one located at the Garden of Kharid. Each day, one herb type is 'spotlighted', granting additional favour, which Polletix will reveal with a right-click option. Once players have accumulated at least 250 favour, they should spend it on Plant Power (Tier I) from Sydekix's Shop of Balance. Players who have already completed the Power Planter achievement may skip this section.

Once the player has done enough help, they can let Polletix know about their findings, at which point they can return to Anne Dimitri to follow up.

Anne thanks the player for her strange request, and lets them know she does actually have an update for them, showing a recording device from the Infernal Source.

The flashback shows K'ril Tsutsaroth and Nymora, the Vengeful talking about plans to defend their positions against the forces of Daemonheim in the Zamorakian Civil War. After some discussion, she and a number of Zamorakian cultists approach K'ril, who realises he is being betrayed. Nymora reveals she has arranged an agreement with Bilrach, leader of the Daemonheim forces, to disrupt the Avernic forces and set up a ritual to banish K'ril back to Infernus. Infuriated, K'ril berates Nymora for her weakness in desperation to get her sister back. Bilrach along with a number of other Mahjarrat appear and belittle K'ril for his short-sightedness, and claims it is only fitting that, being the one who summoned K'ril to Gielinor originally, should be the one to banish him from it.

The flashback cuts to a scene near the Wilderness Volcano where Nymora is approaching Moia, who asks if she completed her task. Nymora confirms so, and asks that her sister be released from the diabolus phylactery, to which Moia says there is still more that needs to be done. This set Nymora's anger upon Moia who begins approaching her to fight, with Moia simply reminding her she can crush her sister's soul like an insect if she cared to. She assures Nymora she will get her sister back if she continues to assist her, and Nymora agrees begrudgingly.

Anne Dimitri states after the recording is over that the Zamorakian Civil War is effectively over, and that soon Bilrach's combined forces will soon turn their firepower south of the Wilderness. The player will then be prompted to Falador and speak with Adrasteia, who will agree with the findings, trying to find a way to balance protecting Misthalin from Zamorakian forces as well as her own crown coronation. She thanks the player with a sendoff. 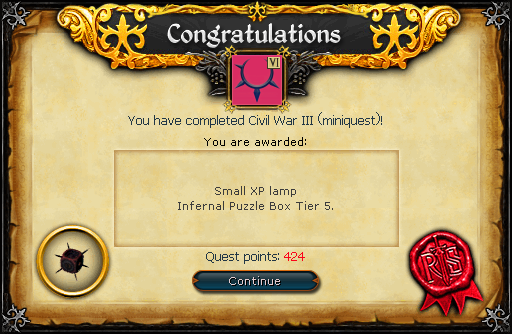 Civil War III (miniquest) is not currently required for any quests or miniquests.

This information has been compiled as part of the update history project. Some updates may not be included - see here for how to help out!
Retrieved from ‘https://runescape.wiki/w/Civil_War_III_(miniquest)?oldid=35946642’
Categories:
Hidden categories: