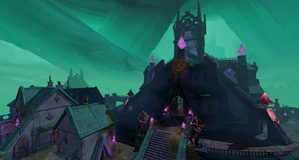 City of Senntisten is a quest which was announced at RuneFest 2019.