The special effect
Abbess Benita explains the use of the robes.

Citharede robes are a reward from the One Piercing Note quest. They can be found in the robe cabinet in the basement of the Citharede Abbey, which can be reached from the north-east descending staircase. As they are related to the god Saradomin, each piece of the set provides protection against Saradomin followers in the God Wars Dungeon. They also alter the player's appearance in the Zamorak and Guthix portals at Castle Wars.

The Citharede robes have a unique function that allows players who are wearing the complete robe set (hood, top, bottom, and symbol) to recharge their Prayer points by listening to musicians found around Gielinor, at the speed of 30 prayer points per game tick, or 150 points every 3 seconds.

The complete set can be stored in the armour case in a player-owned house.

If destroyed it can be recovered from the Abbey's robe cabinet in the basement. 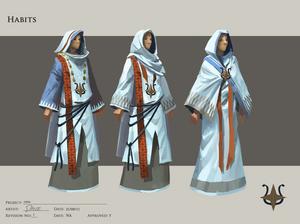