From the RuneScape Wiki, the wiki for all things RuneScape
Jump to navigation Jump to search
Not to be confused with Inquisition of Saradomin.

The Church of Saradomin is a religious organisation dedicated to the worship of the deity Saradomin. It represents the largest religion in the world and allegedly has connections to every major human kingdom.[1] The Church's influence was great enough to impel a prior King of Asgarnia into limiting the Guthixian Void Knights to the area aroundTaverley.[2] And in Misthalin, the Church is reponsible for installing Aeonisig Raispher as permanent Saradominist religious advisor for King Roald.[3]

The Church places some amount of authority in the isle of Entrana, which Saradominists believe is where Saradomin first arrived on Gielinor. The island is considered holy and hosts a church and an order of Monks headed by the High Priest of Entrana.[4]The island collects wealth from Saradominists across Gielinor, and its High Priests have far-reaching authority. They have set calendars, dictated proper procedures for marriage ceremonies, and put down other laws that govern the lives of many Saradominists.[5] 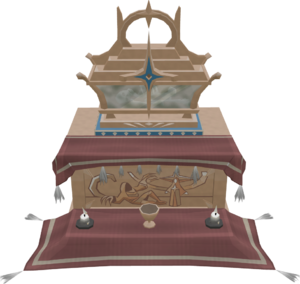 A reliquary with artwork depicting Saint Elspeth with a Saradomin star shining from her head.

Many Saradominists only accept the existence of three deities: Saradomin, Zamorak, and Guthix.[6] The Church is also sceptical of the druids' claim that Guthix shaped Gielinor and banished the gods at the end of the God Wars.[7] The Saradominist version of events holds that Saradomin would have won the God Wars, but in an act of mercy allowed Zamorak to escape and agreed with the other gods not to intervene, so that they would not destroy the world through their combat.[8] Some members of the Church choose to interpret this symbolically, as representing the battle between good and evil within oneself, rather than as literal events.[9] Abbess Benita of the Abbey of St. Elspeth wrote a book on the subject of the God Wars as a spiritual allegory.[10]

Knowledge of demons is supressed by the Church. Performing rituals and reading tomes related to demons is forbidden and the punishments for doing so may be severe. Ellemar was charged with blasphemy and sentenced to execution for studying demonology and summoning Agrith Naar.[11] The Church also disapproves of golems, believing them to be unnatural, which has discouraged people from pursuing the art of golem construction.[12]

The Church recognises at least two Saints: Saint Elspeth and Saint Zilyana.[13] It is not known how and by whom saints are recognised. Saints may be depicted with a star of Saradomin above their heads, similar to a halo. Saint Elspeth's ghost has a literal, smaller such star floating above her head.

The Church of Saradomin has churches in: