From the RuneScape Wiki, the wiki for all things RuneScape
Jump to: navigation, search
Christmas cupboard? (edit) 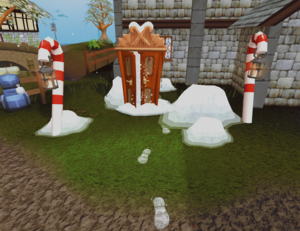 The christmas cupboard near Draynor Village

In 2009, there were three cupboards available to players, one each in Varrock, Falador, and Draynor Village. Each cupboard was accompanied by a partygoer exclaiming phrases such as Come inside, wine, food, and many more! and Merry Christmas! Merry Christmas!

In 2010, four cupboards existed, one each in Varrock, Falador, Draynor Village, and Lumbridge. They were each accompanied by Fremennik men and women, who explained the nature of the Heimland Games.

In 2018, the cupboard was used to teleport to hotspots depending on what the winter weekend was. During the first weekend it offered teleports to the Temple of Aminishi, Dragonkin Laboratory and Daemonheim.