A giant Christmas cracker could have been found at the Lumbridge Crater during the 2014 Christmas event. Players could have contributed to the cracker by handing in festive paper to Santa Claus.

Once a total of 250,000 sheets of festive paper (spread across all servers) were turned in, a message announcing the cracker's completion was broadcasted in the chat interface.

Successfully breaking open the cracker revealed a chest, which could be looted by anyone for a festive lamp, a Christmas cracker joke, and an additional 50 cheer points. The emote Cracker Pull was also unlocked upon the player's first cracker pull. The cracker reset after 30 minutes, regardless of whether it was successfully opened or not.

After the event's removal, the Cracker Pull emote was awarded to all players who had handed in at least one festive paper. 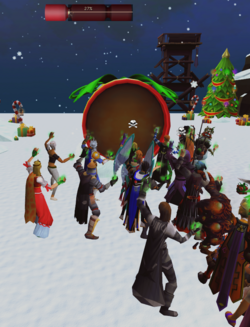 This information has been compiled as part of the update history project. Some updates may not be included - see here for how to help out!
Retrieved from ‘https://runescape.wiki/w/Christmas_cracker_(2014_Christmas_event)?oldid=35657353’
Categories:
Hidden categories: