From the RuneScape Wiki, the wiki for all things RuneScape
(Redirected from Christmas Advent Calendar (2019))
Jump to: navigation, search 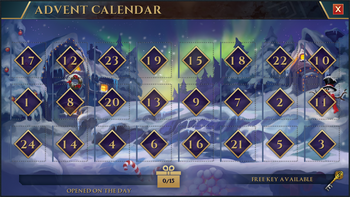 The Advent Calendar interface for 2019.

During the promotion experience and bonus experience gained from most lamps and stars was increased by 50%.

Players can open a new window each day during the event, revealing a present with different rewards inside.

Opening 15 windows on the day they become available will unlock Merry, the baby yeti pet.

Furthermore, navigating left from the window for 1 December, the window for "0th December" is shown, featuring some humorous messaging. Clicking the reward enough times gives a Treasure Hunter key, and then disables the window.

The following messages will appear when trying to open the reward on the 0th December:
What are you doing!?
You're not supposed to be here.
There's nothing in this chest!
Please leave it alone!
Please.
If I was to give you something would you stop?
Fine.
You have been awarded 1 Treasure Hunter key.
You already got your prize.
Please leave.
Please!
I'll move you myself and disable the button!
You've been warned.
Okay, that's it. We're done here.
Merry Christmas.

Each day of the event a different Treasure Hunter promotion runs.

The lava lanterns replace all the normal lamps and fallen stars.

Some of the normal lamps and stars are replaced by the following.