From the RuneScape Wiki, the wiki for all things RuneScape
< Chompy bird
Jump to: navigation, search

Hunting chompy birds is an activity unlocked after completing the Big Chompy Bird Hunting quest. Players can hunt these for raw chompy meat, or to unlock various chompy bird hats. 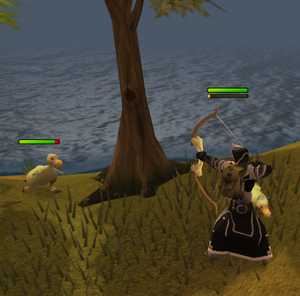 A player catching a chompy bird

Players may hunt for chompy birds in the area south of Castle Wars and in the Feldip Hills. Use Portable fairy ring: BKP and head several steps north. Place Oldak Coil on top of the brown mound. Load cannonballs.

Players should inflate their bellows from one of the swamps. For maximum convenience, players should place both the empty bellows and bloated toads on their action bar.

Next, players should find 3 toads, which are hopping around nearby, and inflate them with the bellows. The frogs are a simple left-click when the player has filled up their bellows. Players can have up to 3 toads in their inventory. Players can place all their frogs on the ground. Once that happens, their inventory will be empty, and they can get more toads. Players may have more than 3 toads on the ground, if they bloat up enough toads. One method is to place 3 lines of 3 toads in a square formation and then to refill the bellows.

When a chompy bird spawns, a flashing yellow arrow will appear on the player's screen. Once the chompy spawns, they do not have to be attacked straight away, as they stay for 1 minute; however, it is advisable to attack them, as they will eat the toads. If a chompy is eating a toad, they cannot be attacked until after they are done eating the toad.

As chompies have 300 life points, the coil will often than kill the bird in 1-2 hits without player intervention. However, chompies may get stuck behind obstacles (including the corpses of other birds!) and so players must still be vigilant to ensure that all birds are killed. The coil will not hit chompies while toads are being bloated or the bellows are being filled. If 2+ players are hunting in the same area, that chompy is reserved for a specific player. 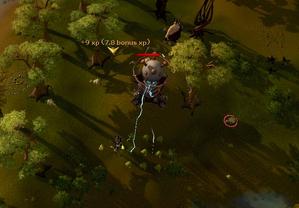 A player hunting chompy birds with an Oldak Coil, having 3 lines of 3 toads.

Players can choose to pluck the birds after they die for feathers and raw chompy. By using area looting and grace of the elves, players can quickly loot and automatically bank the raw chompies. The current Grand Exchange price for 4,000 raw chompies is 27,068,000 coins and 80,000 feathers is 800,000 coins. Each chompy plucked provides 11-30 feathers (averaging 20).

To obtain chompy bird hats, talk to Rantz to the east of Feldip Hills and select the option to see the hats he has to offer. An interface will open that shows all of the various hats and the number of kills required for each one. Players can choose a hat as many times as they want to obtain duplicates that will stack in the bank. Rantz will replace any lost hat for free. When receiving the final hat, the expert dragon archer hat, the player will also get a one-time reward of 30,000 Ranged experience.

To get 4,000 chompy bird kills for the expert dragon archer hat, a player using the above method will spend ~20 hours and use ~4,000 cannonballs. Most players average 180-250 kills per hour. However, there is no guarantee that each player will achieve this every hour.