From the RuneScape Wiki, the wiki for all things RuneScape
Jump to navigation Jump to search
The Old School RuneScape Wiki also has an article on: osrsw:Chompy bird
"Chompy" redirects here. For other uses, see Chompy (disambiguation).

Chompy birds are monsters that can only be killed after completion of Big Chompy Bird Hunting. They can only be attacked with the ogre composite bow or ogre bow equipped, and bloated toads must be used as bait to attract them. When a chompy bird is killed, a message says: "You scratch a notch on your bow for the chompy bird kill."

After 30 kills, the player can wear chompy hats. When a chompy dies, it leaves a corpse, which can be plucked to gain feathers. Doing this will also place a raw chompy and some bones on the ground. Upon reaching 4000 kills, players will be rewarded with 30,000 Ranged experience (which can be increased with bonus experience).

Players have a 25%/50%/75%/100% chance to spawn an additional chompy bird while hunting chompy birds, respectively if Easy/Medium/Hard/Elite Ardougne achievement diaries are completed.

The dwarf multicannon and its variants the oldak coil and kinetic cyclone can target and kill chompy birds if the cannon's owner has one of the required bows equipped. 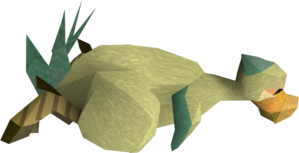 Pluck its feathers, and it's ready to be cooked