From the RuneScape Wiki, the wiki for all things RuneScape
Jump to navigation Jump to search
This article is about the Spring Fayre attraction. For the Hunting D&D, see Big Chinchompa.
Item JSON: {"edible":"no","disassembly":"no","stackable":"no","stacksinbank":"yes","death":"alwaysinclwild","name":"Chinchompa hunt","bankable":"yes","gemw":false,"equipable":"no","members":"yes","id":"39934","release_date":"24 April 2017","restriction":"limited","release_update_post":"Spring Fayre","lendable":"no","destroy":"You can get another map from Menowin whilst the Spring Fair is still running.","highalch":false,"weight":0.005,"lowalch":false,"tradeable":"no","examine":"A map used to seek out the location of special, prize giving chinchompas.","noteable":"no"}

The chinchompa hunt map could be obtained from Menowin during Spring Fayre and may be regained from Diango or Ianto if destroyed after the event.

It could be read to reveal a six-by-five grid of 30 squares that could be searched to uncover chinchompas for prizes. The map reset each week with new prizes for the four first weeks. After that (starting from the beginning of 22 May 2017) no more Chinchompas could be searched. The first search each day was free and subsequent searches costed 40 fayre attraction tokens. A bond could be used to obtain all the weekly prizes.

Previous prizes could be bought from a store opened by right-clicking the map. During the first week there was no store active and this simply prompted the message "There is nothing available on the store right now. Try again next week or try and find the items by searching for Chinchompas." During the following weeks this opened Chinchompa Reward Shop that could be used to buy the last week's outfit override with fayre prize tickets.

There was a confirmation prompt about spending tokens before searching a square that can be toggled off permanently.

Attempting to search a square without enough tokens, the following messages were seen:

Winning a piece gave the message:

Unlocking a prize through the store gave the message:

Completing an outfit gave the message:

Attempting to search a tile after the beginning of 22 May 2017 gave the message: 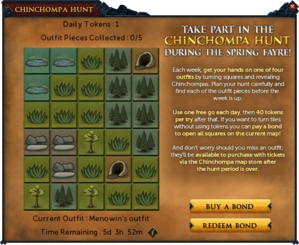 The map for the hunt

The following are available in addition to the previous week's items:

The following are available in addition to previous weeks' items:

No more prizes could be searched for after week 4.

The following were available in addition to previous weeks' items:

This information has been compiled as part of the update history project. Some updates may not be included - see here for how to help out!
Retrieved from ‘https://runescape.wiki/w/Chinchompa_hunt?oldid=35690985’
Categories:
Hidden category: