From the RuneScape Wiki, the wiki for all things RuneScape
Jump to navigation Jump to search
For the achievement, see Chef's Assistant (achievement).

Chef's Assistant is a short to medium length novice quest and is a sequel to Cook's Assistant. To start the quest, the player must talk to the Head Chef in the Cooking Guild.

During and after completing the quest, players will be able to make various cheesecakes, that restore both life and Prayer points.

The starting point of the quest, the Cooks' Guild.
Items needed: Chef's hat unless the Hard Varrock achievements have been completed (members may use a sous chef's toque, cooking cape or max cape instead)

The quest can be started by speaking with the Head Chef of the Cooks' Guild. Located in Varrock, the guild can be found west of the entrance to the Varrock Grand Exchange.

After hearing about the player successfully assisting the Lumbridge cook in baking a cake, the Head Chef asks the player for help in making a new type of cake.

To start off, the chef will require some ingredients for the cheesecake. The first item is cream cheese, which can be obtained from Phil and Delphie in Falador, just south of the Party Room. After speaking with Phil and Delphie, they will ask the player to repair their dairy churn using logs and a steel bar. After repairing the churn, talk to them again and they will require some milk in order to make the cream cheese. A bucket of milk can be easily obtained from the milk seller at the mansion near Seers' Village. Then, with a bucket of milk you can use the churn to make the item. If you brought extra buckets of milk to make a pat of butter and/or a pot of cream, you may do it now (take care in the diary churn interface to make just one of each).

Return to the head chef and he will ask you for a pot of cream and biscuits, he will also give you a cheesecake ingredients list. Pots of cream may be purchased at shops or may be made by using a dairy churn with a bucket of milk. A pot of flour can be purchased by members from Romily Weaklax who is right beside the Head chef. Biscuits can be made by combining a pot of flour and pat of butter to make biscuit dough, which then can be cooked on a range (two are available on the second level). A pat of butter can be made in a dairy churn with 38 Cooking, purchased from the Culinaromancer's Chest after partial completion of Recipe for Disaster, or bought from the Grand Exchange. Alternatively, you can talk to the Head Chef again, who will give you a pat of butter for 50 coins.

The last listed ingredient is a cake tin which can be found upstairs at the Cooking guild, or bought from the Grand Exchange. 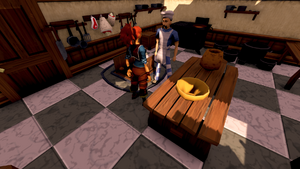 Delivering the cheesecake to the Lumbridge cook.

The first member, Mess Sergeant Ramsey, can be found east of the Taverley lodestone, inside The Pick and Lute pub.

Each member will state the cake is odd, but delicious. Return to the head chef once all members have been visited. 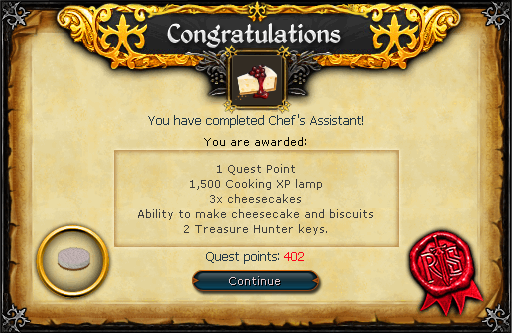 Chef's Assistant is not currently required for any quests or miniquests.