From the RuneScape Wiki, the wiki for all things RuneScape
Jump to navigation Jump to search
Not to be confused with Charming imp. 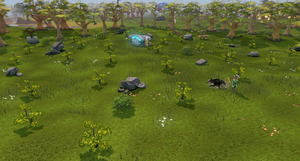 Charm sprites are fast, flying creatures that can be hunted with a Yaktwee stick and Sprite lure. They are located south-west of the Tree Gnome Stronghold and require 72 Hunter to be caught (boosts cannot be used). There are three different versions of charm sprites:

When revealing charm sprites, one, two, or three will appear. A Gleaelg will always appear; if two charm sprites appear, then it will be both a Gleaelg and Tranart; and if three appear, it will be one of each charm sprite. Experienced players can catch all three with ease.

On the 100th, 1,000th and 10,000th capture of each type of sprite, players will be notified in the chatbox, and it will appear in the adventurer's log (counts are separate for each type of sprite). There is only a reward for the 1,000th capture; after catching 1,000 charm sprites in total (spread across all 3 types), players can upgrade the yaktwee stick to an enhanced yaktwee stick by talking to Yaktwee Swinmari Cianta while wielding it. The enhanced stick grants a 2% xp boost in ALL hunter activities where players can wield the stick. When catching charm sprites, it will also increase the rate of finding rarer sprites.

The charm sprites were originally discovered by Edina, who was collecting neverberry leaves when the movements of the sprites scared her. She fled to the Tree Gnome Stronghold, and Yaktwee was subsequently sent out to control the creatures.

Charming moths are an alternative, requiring 88 Hunter and 83 Agility. They are located in the Wilderness, but offer much higher charm rates.

To start hunting the sprites, players must first buy a yaktwee stick and Sprite lure from Yaktwee Swinmari Cianta for 2000 coins each. He can also store the player's stick and lure, along with a supply of charm slices (up to 15 of the regular slices, and 255 of the mystical ones).

Neverberry bushes spread out in the area around the cracked dolmen. Players have to target a bush that is shaking; only moving bushes can contain sprites. After throwing a spirit lure next to the bush, "Target" it with your Yaktwee stick. One to three charm sprites will appear, and proceed to click them all.

Players must deal with the greatest limiting factors behind catches-per-time in order to minimize the amount of time it takes to fully upgrade the stick.

The first and greatest limiting factor behind the quantity of sprites which may be caught each minute is the number of shaking bushes which are exploded per minute. Consequently, the most efficient sprite farming will want the fewest number of ticks between targeting a bush, exploding the sprite, and targeting the next bush. With a bit of practice, players can keep up their rates of sprites by keeping a smooth cycle between targeting bushes, exploding sprites, and immediately re-targeting a new bush. As long as players are targeting bushes, targeting the sprites, and then targeting a new bush with minimum delay, there is no faster possible rate of catches per time.

To perfect this, players can practice and hit this maximum rate by IGNORING the sprites and just get used to targeting bushes, charms, then a new bush as quickly as possible.

In this activity, more than one action can be executed within one tick. (unclear exactly how many) Despite the player's slow animations which appear to only execute one action per tick, you can start target a new bush as soon as your lure has been exploded; you do not need to wait a full tick AFTER the charm has exploded and been returned to your inventory for you to target a new bush. Other actions which are executed within one tick include targeting multiple sprites.

Another limiting factor behind the quantity of sprites per time is the travel time of lures, and travel time needed to explode a lure. These cannot be reduced in any way except if the player moves closer to bushes. Consequently, players can try to practice improving efficiency by executing move commands in-between actions.

A player lures a charm sprite.

As long as you start to target your lure (and the animation has started) before the bush stops shaking, it will still release sprites when the lure explodes.

The fastest method for luring charm sprites is as follows:

Repeat 3-5 for maximum sprites per hour. If your targeted bush has stopped shaking while you were off catching the sprites, do not worry. Just repeat this process from step one and you will be on track again. This method allows for approximately 60,000 Hunter experience per hour at level 72 Hunter.

It is highly suggested to use the Memorial to Guthix perk, "Decree of Mortality." This perk gives a chance to receive memory shards for checking hunter traps, however it works with hunting Charm sprites as well.

A player targets a Gleaelg and obtains a gold charm slice.

On successful captures, players will always receive one of the following:

It is recommended to use mystical slices to make or finish off blue charms, as blue charms generally offer the most summoning experience, especially at higher levels (with the exception of the crimson charm talon beast pouch).