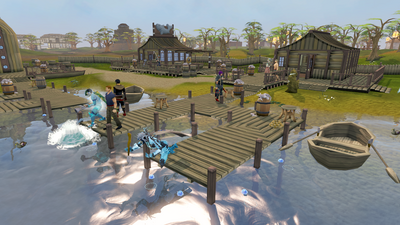 A group of players fishing.

An example of a real-world human-controlled player character. 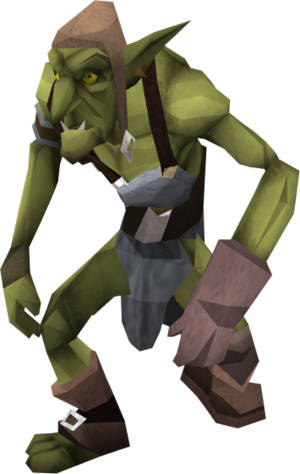 This Goblin is an example of the many NPCs in RuneScape

Some NPCs can be attacked while others can't. Attackable NPCs are known as monsters. Some can attack players if the player's combat level is twice that of the monster or less. These monsters are said to be aggressive. NPCs who can't be attacked are simply known as NPCs (even though the term can apply to both kinds of characters). These can usually converse with the player or carry out a certain action. Examples of these NPCs are bankers, who allow players to access their bank accounts. Most NPCs have a certain zone through which they can move freely (exceptions are random event NPCs and certain quest related NPCs, such as King's messenger, who can appear anywhere). Most monsters have combat levels just like players (exceptions are the Strange plant and the Security Guard), but many NPCs do not.

There are many different possible 'looks' for your character. Many players do not care about their look as their characters are almost always seen wearing armour.

In-game players are often named by their username by other players and by NPCs. NPCs sometimes give nicknames to players depending on their relations to them or by their descriptions or by their traditions or by any other methods not mentioned here. For example, upon completion of the Fremennik Trials quest, players are called by their Fremennik name. Another example is how the Troll race give names depending on what they first ate as a child. Different races call players different names as well such as Mortal and Human. In most quest involving with the mainstream RuneScape storyline, players are frequently referred to as, the Adventurer, meaning that the player is in fact an adventurer or a chosen hero.