From the RuneScape Wiki, the wiki for all things RuneScape
< Char
Jump to: navigation, search

See Char (monster) for general information about Char and her attacks.

Weapons do not affect your damage, however they do affect your attack speed and accuracy, plus they allow you to attack from a distance if using a ranged weapon. The preferred setup after Evolution of Combat seems to be dual-wielded fastest-speed weapons, such as two daggers or a whip and a dagger. Prior to EoC, fast ranged weapons such as throwing knives or darts were most effective.

Wearing armour is not advisable, since Char's maximum hit appears to depend on the player's maximum life points. Therefore when wearing armour you may actually take greater damage. In addition, there is a lot of running around to be done, and keeping weight low will save run energy. This makes weight-reducing equipment the ideal selection.

With a high enough Agility level, run energy won't be a problem. However if you find you are running out of run energy, then super energy potions are a useful addition to aid in energy restoration. Alternatively, if As a First Resort has been completed, it is highly advisable to use the salt-water spring in Oo'glog. Light food such as summer pies or stackable food like purple sweets or holy biscuits are the best options, although monkfish or sharks will suffice.

A healing familiar such as a Unicorn stallion or Bunyip could be of use, or a Beast of burden like a Spirit terrorbird to hold any extra food. Tireless run scrolls are a good idea to bring along should you choose to take a terrorbird with you to aid in energy restoration.

It is advised to place the pitch can on your action bar.

Inventory: the pitch can, 2 super energy potions (optional), a full inventory of sharks (or better) and a terrorbird (or higher) filled with sharks to maximise the chance of victory. Alternatively, a Unicorn stallion is feasible for those with 88 Summoning.

Firstly, climb the stairs and talk to her. During the dialogue Char will assume her battle form, completing the dialogue will cause Char to attack you after a very short time. Only allowing her to transform and running away before the dialogue is finished will still initiate the fight.

If you do not run away from her quickly enough, she deals some damage. To play a hit-and-run technique running away is strongly beneficial.

Char moves in normal human speed and can only be damaged whenever a pitch can fire is lit by the player. Up to 10 fires can be lit, and Char takes damage equal to the number of fires times 101. Char has no "defence" value and all attacks will deal the same amount of damage. Therefore, any bleeding attack will have huge advantage on damaging Char, as such placing a bleeding ability as the first ability (notably Fragmentation Shot or Combust) in action bar is strongly recommended.

A pitch can fire can also die out after a while, and it serves as an obstacle for both the player and Char. This means Char can be obstructed from approaching the player if the latter keeps running away from her while making fire in the path.

The recommended method to fight Char is hit-and-run, keeping distance from Char and making as many fire as possible, and use ranged or magic attack to deal damage.

It could be possible to trap Char at the west water pool, this is done by going to the west pond and waiting for her to draw near (but not too close) then run over to the east pond and hide east of the waterfall. She will get trapped. Rest, ignoring the small damage the sparks do. The trapping no longer works when Char has below 50% health since she begins summoning fire walls.

Char uses two melee attacks. The first is an accurate medium attack-speed attack that can hit into 1500s. The second is a stomp attack that she occasionally uses when she is next to a fire, lit by a pitch can by the player. The stomp attack extinguishes all fires in a 3*3 area and damages the player if they are caught in the area. Char does not move in the duration of stomp.

Char starts summoning sparks in the area which slowly chases player for a while and dissipated afterwards. Some players have found that catching the yellow sparks in a fire is useful, to increase damage. Others consider the length of the "buff" to be too short and not noticeable enough to be worth bothering with. Either way, touching a spark could only deal no more than 200 damage to player, and it is minimal disturbance compared to Char's high damage outputs. 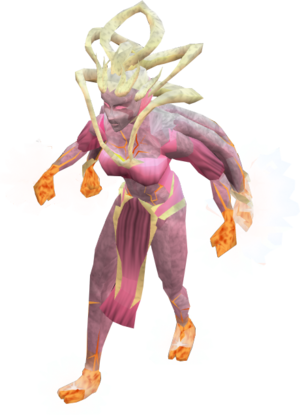 Char in her enraged form.

Char occasionally gets enraged, she glows brighter and becomes invulnerable, while drastically increasing her melee attack damage, causing a heavy (4000+) melee damage whenever the player is within her melee range. She can also deal a melee attack at the same time, which makes her undesirable to even approach her. Any bleeding effects would stop dealing damage to her when she gets enraged.

She would cool down after some time and this can be sped up by luring her into water pools. Alternatively running away and making fire to block her path still works since enraged form does not give any advantage on her movement. Char does not use stomp when enraged.

At 50% of Char's life points fire walls will start to sweep the area. These have openings that the player can pass through unharmed, just like the previous ones, but the player should be more careful to avoid getting near Char when passing through the openings. Generally, running perpendicular to the movement of fire wall so the player will "pass through" the gap of the approaching wall. Running randomly or parallel to the wall would instantly kill the player. If fire wall is too near the player could just stay at the spot or run across it, taking about 2000 damage while avoiding Char. It appears as though running through the wall in the opposite direction as it will nullify/avoid damage under certain circumstances, possibly while on the outside wall.

To prepare for appearance of fire wall, the player should never stay at the north edge of area. Heal up whenever a wall is about to appear, this will minimise the risk if the player has to choose between being hit by wall or Char. An enraged Char must be put to highest priority to avoid, and a normal Char could get enraged at any moment.

Since the battle is safe, fight to the death. You don't need to waste inventory space with an emergency teleport, but you can still use one to resupply if you are defeated.