From the RuneScape Wiki, the wiki for all things RuneScape
(Redirected from Champions Guild fights)
Jump to: navigation, search
The Old School RuneScape Wiki also has an article on: osrsw:Champion's Challenge

You have been challenged!

As it is found in the Champions' Guild, access to the Distraction and Diversion requires 33 quest points. Additionally, some of the champions that make up the minigame may have further requirements to challenge.

Completing all challenges is one of the requirements for obtaining the trimmed completionist cape.

When fighting creatures of one of the 13 'races' that feature in the D&D, one may drop a champion's scroll, which challenges the player to a formal duel by the race's champion. Challenge scrolls are extremely rare drops, with only a 1 in 5000 chance of obtaining, making it quite difficult to duel all the champions. Having a champion scroll enhancer from the Motherlode Maw in Prifddinas will increase the chance of a champion's scroll being dropped by 20% for up to 250 kills (1.2/5000, 250 attempts) of a monster that drops one. It is possible to obtain multiple champion's scrolls prior to challenging a champion.

Once a scroll is obtained, giving it to Larxus in the basement of the Champions' Guild will permanently unlock access to that champion, and the champion may be fought weekly for rewards thereafter. 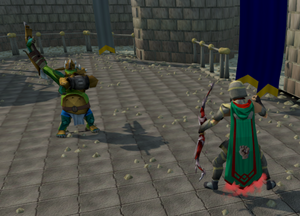 A player fighting one of the 16 champions.

Once a scroll is obtained and given to Larxus in the basement of the Champions' Guild, that champion will become eligible to be fought. Duels with a champion take place in the Champion's Challenge arena, and have certain rules, such as limiting a player's armour, disallowing some items, and prohibiting some forms of combat. All champions prohibit bringing familiars or pouches into the arena. Defeating the champion will grant the player with equal amounts of Constitution and Slayer experience, as well as the ability to fight that champion again every week for even more experience. Defeating all champions awards 59,864 experience per week.

Players can leave a challenge once it has begun by exiting the door in the arena and then climbing the ladder to the upper chamber. Players who die while fighting a champion have their gravestones appear at the ground floor[UK]1st floor[US] of the Champions' Guild next to the trapdoor to the Distraction and Diversion. In either case, the player will not lose their scroll, and can start a new duel by speaking to Larxus again. The scroll will automatically disappear once the corresponding champion has been defeated. 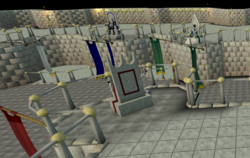 The east side of the Champion's Challenge arena, with The Champions of Champions

One champion may be fought without a scroll. The Leprechaun Champion will informally take on all newcomers, as Leprechauns cannot be fought elsewhere. Because of the informal nature of the duel, the training room, which is accessed via a trapdoor next to Larxus, is used instead of the regular arena. Defeating the Leprechaun Champion awards constitution and slayer experience as with any other champion, but does not count toward qualifying the player to face a champion of champions. Like the other champions, once defeated, he may be fought again in the main arena every week.

When the player defeats a champion, a banner proclaiming the victory appears on a wall in the upper chamber where Larxus is found. The banners are all identical and non-specific about which champions have been defeated. Instead, there is a champion's board near Larxus which, when read, lists the champions the player has defeated (except the Leprechaun Champion, as this is considered an informal match).

A map of the Champion Guild's basement floor

In addition to the Constitution and Slayer experience gained when first defeating a champion, defeating them grants the ability to fight them again for more experience every week, without the need for another champion's scroll.

Additionally, players who defeat Glophren (and thus every champion) may gain a variety of rewards by speaking to Larxus. These include 50,000 coins and four scrolls of knowledge, each of which gives 10,000 experience in any combat skill (prayer and summoning included) in which the player is at least level 50. The title Champion of Champions [Name] is also unlocked.

Victory is Mine
Music unlocked during a Champion's Challenge Fight. 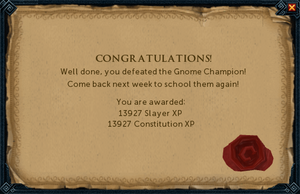