The Champions' Guild is a guild for adventurers, run by the guildmaster. It is located south-west of Varrock and requires 33 quest points to enter. In order to join the guild, players must complete Dragon Slayer, which is started in the Guild. Xenia, one of the Signature Heroes, was a founding member of the guild. While free-to-play players can access the guild, only members can access the basement.

The guild is located near the Varrock lodestone. Alternatively, the canoe transport system has a station located directly behind the guild. The combat bracelet can also teleport the player directly outside the guild.

The ground floor[UK]1st floor[US] consists of a large foyer and a smaller room to the south. The foyer has a large table and a set of chairs where the Signature Heroes can be occasionally found. If they are present when the player enters the guild, Ozan will play a short song before the music player resumes. The guildmaster is also found in the foyer, greeting players who enter and acting as the starting point for Dragon Slayer. The foyer also contains a staircase leading up to the first floor and a trapdoor leading to the basement.

There is a small area on the eastern side of the guild where several chickens can be found and the small southern room contains a range. This makes the guild a good place for players with low Cooking levels to training Cooking and combat, as the chickens' raw chicken drops can be cooked on the range. 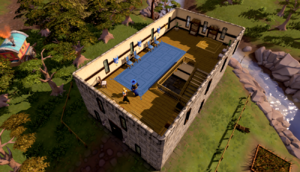 The first floor of the Champions' Guild

There is also a chest which can be searched for gloves, leather boots and some coins.

In RuneScape Classic, there was a one way exit from the upper floor—an emergency exit ladder in the south-west corner could be climbed down to the outside, and could not be climbed up. 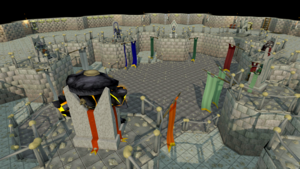 The basement is the home of the Champion's Challenge, a D&D where the champions of various races duel in a special arena. Six champions representing humans, dwarves, elves, gnomes, TzHaar and werewolves sit around the top of the arena. The walls are lined with banners, which are rolled up until the player defeats a champion. The number of champions defeated determines the number of unrolled banners. There is a bank chest near the ladder that players may use to prepare for their battle.

Larxus organises the fights. Players who obtain a champion's scroll from one of thirteen different races of monsters can arrange to fight the respective champion, with each champion having their own special set of rules. Captain Joycey the Leprechaun Champion acts as a teaser challenger, whom all players can fight without a champion's scroll.[1]

The following NPCs are members of the guild, confirmed either through conversation[2] and/or being sighted inside.

The player also becomes a member of the guild, after Dragon Slayer.