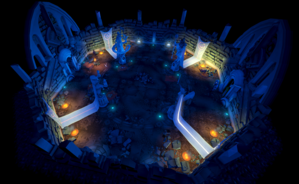 The Chamber of Shrines is a room in the ruins of the old Wizards' Tower. When the tower still stood, it was used as a meeting room for senior wizards. It was also the area that new wizards would pledge allegiance to one of the four orders: Blue, Red, Grey or Green by taking a test from the rune guardian.[1]

The room contains four statues that represent each of the four base elements of Air, Earth, Fire and Water. It also contains the First Tower excavation site which houses three material caches each of Cadmium red, vellum, and white marble. It also has a Rune Guardian near the door to the rest of the old tower.