From the RuneScape Wiki, the wiki for all things RuneScape
Jump to navigation Jump to search
This article is about the original version of the Challenge in-game system. For the current system, see Challenge System.

The Challenge System was originally released on 19 September 2012. Prior to a rework on 16 December 2019, the challenge system offered a wider variety of more-specific challenges than the current Challenge System now does.

For new players, challenges were only accessible after the player progressed to the Challenge chapter of their Path, or if Path is disabled. 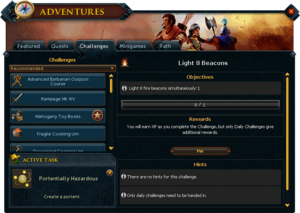 The majority of challenges were listed by skill and challenges for each skill could be viewed by selecting a skill in a drop down menu in challenge tab. Experience might be gained while completing the challenge, but no additional reward was given for completion - it simply served as a suggested activity for players to complete. The choices of challenges were the same for every player. Challenges that require levels that the player did not have were not visible and could not be selected by the player.

To activate these challenges, players could "pin" the challenge. Once pinned, the challenge system tracks the player's completion progress. Progress would continue to be tracked even if the challenge was later unpinned.

Once the challenge was completed, the player was notified by a message in the chat box and fireworks appeared around the player.

A full list of the challenges can be found here.

As with the current reworked Challenge System, players could have up to five active Daily Challenges. It was not possible to gain a challenge in any skill that had an existing challenge in the list.

It was possible to receive a challenge you lack the requirements for such as Char's training cave prior to completing The Firemaker's Curse.

After completing a Daily Challenge, players would talk to a challenge mistress (Fara in Burthorpe, Heriau in Prifddinas, or Rashida in Menaphos) to receive a reward. For each daily challenge completed, the player was rewarded with experience and, after an update, one Treasure Hunter key (with the latter only available for members).

The experience would always be given in a skill relating to the challenge. In cases where multiple skills are involved, such as with combat, players were be given a Challenge XP Lamp from which to choose which skill to earn experience in. The experience given in each skill differed before the rework on 16 December 2019:

If the player had dropped the items being made, wore them as equipment, stored them in a Beast of Burden familiar, or the items were subsequently lost, then the challenge mistresses would note that the challenge had been completed but would not grant a reward until the items are obtained again. This included the experience reward. Items further processed from the form required by the challenge were not also accepted. For example, Cooked fish could not be turned in if challenge required raw fish. However, the player could buy the items from others to turn in - it did not matter whether these were the specific items obtained when completing the challenge.

Similarly to the current Challenge System, players could choose to toggle the receiving new daily challenges in any skills that have maxed levels.

Members could reroll or extend daily challenges from the Challenges tab using vis wax. A reroll cost 25 wax and an extension cost 50.

An extended challenge would be doubled in length, and the player would receive double the experience reward and reimbursement from the mystery bag. A challenge could be extended after progressing on it, or even after completing it, so long as it had not been handed in. Because of the differing experience rewards available in different skills prior to the rework (as above), it was particularly beneficial for players to extend the tasks in some skills (e.g. Dungeoneering) over others. 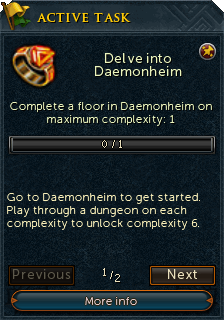 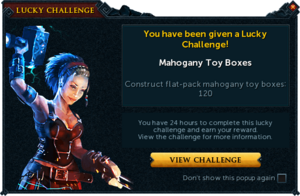 Lucky challenges were members-only rare daily events that would occur to players while completing activities in game. These challenges could be gained from a range of actions including completing a quest, sending out a voyage in Player-Owned Ports, and training a skill. The required task would be similar to those of Daily Challenges. It would be notified by a pop-up interface in-game (see an example picture on the right). Additionally a message would be displayed in the player's chatbox notifying them that they have received a lucky challenge, for example:

You've been given a Lucky Challenge: Magic Logs 0/30
Check the Challenges interface to find out more information.

Lucky challenge would appear in the list of daily challenges in the Challenges tab of the Adventures interface, but could be distinguished from them by the clover icon,

, instead of the star, by duration being measured in hours instead of days, and by the prefix "Lucky Challenge:" in the challenge name.

A list of potential Lucky Challenges can be found here.