Certer was a random event. Certers Miles, Niles, or Giles teleported a player to their office and presented them with a rotating image of an item, and three possible choices of what it is. If a player correctly identified the item, they would receive a Random event gift and were then free to use the exit portal. An incorrect choice would result in the player's equipment and inventory being noted and the player being teleported to a random location.

Their new office includes a working Deposit box. You cannot access all your controls whilst in this office. For instance, you cannot use Prayer, but if you had prayers active before you were teleported here, you would be teleported back with the prayer still active but not having been drained. In RuneScape Classic, the Certers ran exchange stalls around RuneScape converting various items into certificates (certs for short) for large quantity trading. Five of the items traded for one certificate, which were stackable. The tedious process involved making many trips from the bank to the certers.

When RuneScape 2 was released, the certers were removed from the game because the bank note system rendered them obsolete. Existing certificates were all converted into bank notes. Niles, Giles and Miles were soon re-released as this random event in reference to their old trade but the other certers were not.

Although this suggests that this random event would have been removed, it was only modified in the Random Event Update and More update.

Before the Random event rework, one of the Certers appeared next to the player. The question window opened when talking to the certer. If ignored, he gave the player four warnings. If the player yet ignored him, he teleported the player to a random, relatively safe place and turned his inventory and equipment into bank notes. Some players considered this very annoying during combat. 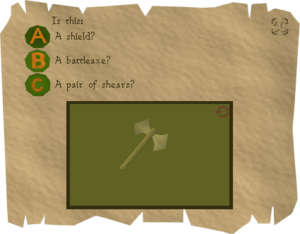 An example of a question asked by the certers