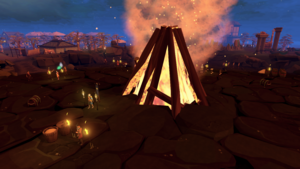 The Lumbridge Crater during the Celebration. 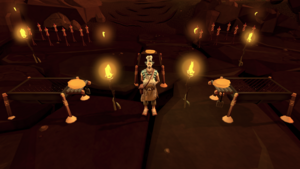 The Chef and his hot grills.

During this promotion Guido Fawkes hosts a bonfire in Lumbridge Crater. He can be found south of the bonfire. The bonfire can be used to train Firemaking and Cooking.

The bonfire has the following benefits:

Ironman players can use the bonfire, but will not receive the above benefits.

The bonfire remained with the four bank chests after the 2016 event until the end of Birth by Fire event. 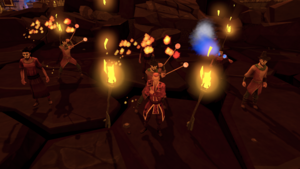 Emmett with his fire dancers. 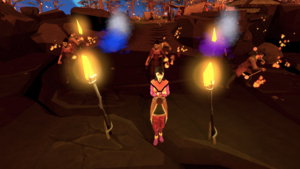 Sera with her fire dancers.

Sera, Emmett, Chad and Evey can be found around the crater, next to various performers. Sera is located to the west of the bonfire, Emmett to the east of it, Chad to the north-west and Evey to the south-west. Sera and Emmett stand by groups of three Poi Dancers and three Fire Breathers. Chad is next to two Lantern Builders, and Evey is found next to two Spirit Summoners.

Ironman players can claim and use the free items to view the animations, but will not be rewarded any experience for doing so.

Birth by Fire is an event that directly followed the Celebration of Fire in 2016. On 8 November 2016, the Fallen Nihil emerged from the bonfire and asked players to gather burning embers for him so that he can return them to the Queen of Ashes.

Carlos the Chef can be found north of the bonfire with three grills behind him. He gives players one free snack, a strange lobster.