From the RuneScape Wiki, the wiki for all things RuneScape
Jump to navigation Jump to search
The RuneScape Classic Wiki also has an article on: classicrsw:Cauldron of Thunder

The Cauldron of Thunder is a special cauldron that was used in the old version of Druidic Ritual. Players would dip Raw chicken, Raw beef, Raw rat meat and Raw bear meat into it. It is located in Taverley Dungeon, just north-east of the entrance ladder.

The cauldron used to be guarded by two level 19 Suits of armour that were right outside the gate. Due to the Drudic Ritual update, they no longer appear in the game. Between the cauldron and the entrance are level 22 Skeletons. Players with lower combat levels should be aware of this. 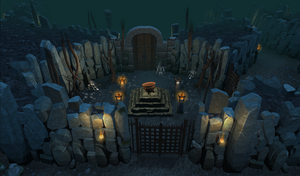 The cauldron behind the gate

This information has been compiled as part of the update history project. Some updates may not be included - see here for how to help out!
Retrieved from ‘https://runescape.wiki/w/Cauldron_of_Thunder?oldid=35700746’
Categories:
Hidden categories: