From the RuneScape Wiki, the wiki for all things RuneScape
Jump to navigation Jump to search
For the achievement, see Catapult Construction (achievement).

Catapult Construction is a short quest in which the Tyras Camp's rotting catapult is restored and tested.

Things are not going well for the Catapult Guard at the Tyras Camp. Already unpopular with his comrades after his security lapses, he's now neglected the catapult and allowed the damp of the forests of Isafdar to seep in and rot the frame. General Hining is furious, the replacement catapult parts haven't arrived and the rookie catapult engineer has gone missing.

It's a good thing, then, that a bold adventurer with your knowledge of Construction is in the area. Of course, this will take more effort than forming furniture - catapults are complicated pieces of equipment - ensuring that this mission will mean your exertions will be mental as much as physical. 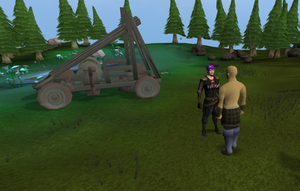 The Tyras guard wanders near the catapult.

Speak with the Tyras Guard north of the Tyras Camp by the catapult (the same one talked to during the quest Regicide). He will explain that General Hining may be wanting to remove him from the job as he has not been treating the wood on the catapult properly. After an unsympathetic conversation, he asks you for help. He needs someone with more experience in Construction to help him repair the catapult. Tell him you will help.

Head to the Tyras camp and speak with General Hining. He will explain that the catapult is an essential part of the camp's defence and that without it, it could mean disaster for the camp. He will give you permission to help repair the catapult. He tells you that you need to find the missing engineer whom he suspects is off somewhere in the forest. He will also give you an Engineer's letter to bring to him. If you lose it, speak to General Hining again to receive another one.

Find the Catapult engineer. He is located in the clearing just barely north of the Catapult, but while he can be seen it is impossible to walk directly through the trees to get to him. Instead use the Tirannwn Lodestone and head north-west past two groups of rabbits. (If you don't have access to the Tirannwn Lodestone, you'll need to go back to the Tyras Guard at the catapult, then walk through some dense forest to the east and pass a tripwire, which may poison you, to reach the lodestone.) Then pass north through the leaf trap to the bears and Pawyas. To the west, search for a little path between the trees and past the sticks trap that leads south to the Engineer. Be careful of the stick trap! Speak with the Engineer and offer your assistance.

Once you have all the parts, read the schematics and choose to make the repair parts. After making the parts, talk to the engineer and ask him to let you read the letter that you gave him earlier. Speak to him again and ask him about Rolad.

Find Rolad in the east building at the entrance to the Dwarven Mines on the edge of the Ice Mountain (North of Falador). He says that he has already sent a delivery dwarf to Port Sarim with the catapult parts.

Head to Port Sarim, where you will find Thaki the delivery dwarf in the Rusty Anchor pub north of the docks. Speak to him and try to get him to give you the metal catapult parts. However, he will refuse since you don't strike him as a sailor. Search the Drunken Sailor outside to get a sailor's hat. Alternatively a tricorn hat from the naval outfit will also work. Wearing the hat, speak to the delivery dwarf again (who happens to notice the difference). This time you will get the metal catapult parts. Since you're near the port, you could use a Charter Crewmember to take you to Port Tyras for 3,200 coins. Otherwise, use the Tiranwnn Lodestone and find your way back to the Tyras Camp.

To repair the catapult, you will have to fit the different pieces of the catapult in a tetris-like puzzle. There are two sides: an orange and a purple side. Both require certain pieces to make it work. There are many possible combinations to fill out one side, but it may not leave you with the correct pieces to complete the other. The following two pictures show the correct piece placements.

Click on a part to make it appear on the screen. Use the directional arrows to move it up/down/left/right, the circular arrows to rotate it clockwise/anticlockwise, the yellow curved arrow to select the opposite side, and the green sunburst button to restart. If the wrong piece is put down, the board can be tidied up by right clicking that piece and removing it.

Once you have solved the puzzle, you have to test the repaired catapult. You will have to hit three stones with an 'X'. Increasing the counterweight causes the stone to fly farther; decreasing the counterweight causes it to strike nearer. The direction just needs to be lined up with the arrow at the bottom of the screen. This part is fairly easy compared to the other puzzle. It requires a small amount of trial and error, but can be quickly finished. 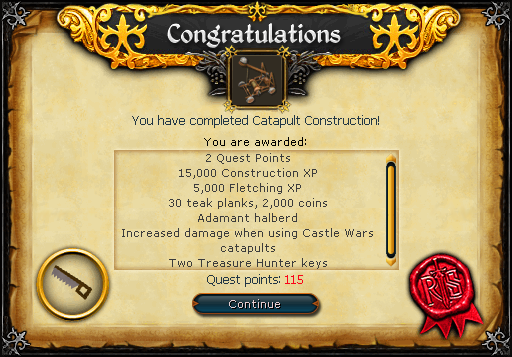 Catapult Construction is directly required for the following quests/miniquests: