From the RuneScape Wiki, the wiki for all things RuneScape
Jump to: navigation, search
Case report 1? (edit)

Case report 1 is obtained during the Distractions and Diversion Court Cases. It contains information about fingerprints, on the case the player is currently doing. It differs on whether the player is prosecuting or defending the accused.

If destroyed, it can be re-obtained from the filing cabinet in the Seers' Village courthouse.

The player must correctly match a print taken from the scene to one of three possible suspects, which if correctly matched can then aid in prosecuting or defending cases. However, in some cases, the report may not contain any fingerprint evidence. 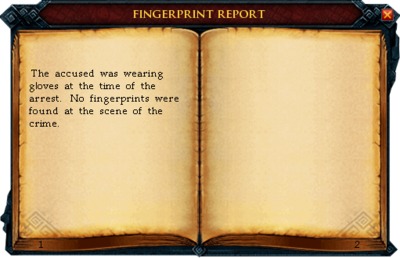 An example of a fingerprint report.