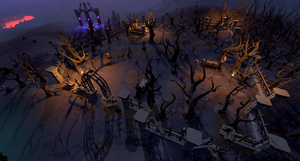 The area where Carrallanger once prospered, now a graveyard.

Carrallanger was a Zarosian fortress that was located in current-day Wilderness. It was destroyed during the Third Age, when Zaros's settlements were being wiped out by followers of Zamorak and Saradomin. Carrallanger stood where the Graveyard of Shadows resides today, in level 19 wilderness, east of the Wilderness Volcano. Those with the knowledge of Ancient Magicks spells from the completion of the Desert Treasure quest can utilise the Zarosian spell Carrallanger Teleport to teleport there with the required 84 Magic, 2 soul runes and 2 law runes.

Carrallanger was destroyed relatively early in the Third Age, when both Zamorakian and Saradominist forces were attempting to remove all traces of the defeated Zaros from Gielinor. The precise date of Carrallanger's destruction is not known, but it was after Senntisten fell, as Carrallanger was one of the places that the survivors of that city's destruction fled to.