By right-clicking the headdress and selecting 'change-feathers', players can alter the colour of their headdress' feathers from blue to pink and back again. It can be stored in a Toy box in a player-owned house. 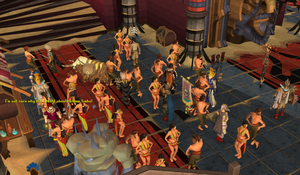