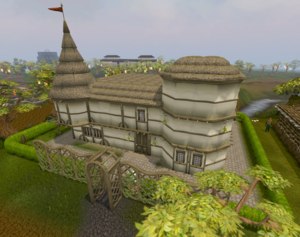 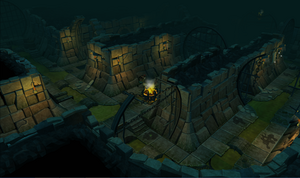 The sewers beneath the mansion
The location of the family's home.

The Carnillean family is one of the wealthiest and most noble in Ardougne. They live in the southern part of East Ardougne, close to the large wall separating it from West Ardougne. The family first appears in the quest Hazeel Cult, and later in Carnillean Rising.

In Hazeel Cult, the player has the option of siding with either the Carnillean family in order to put a stop to the Cult of Hazeel, or a group of fanatics devoted to the ancient Mahjarrat lord Hazeel, who once ruled over the area now known as Ardougne. The Carnillean family is descended from the man who originally defeated Hazeel and freed Ardougne from his reign of terror. If the player chooses to side with them during Hazeel Cult, they must help them take back the family armour, known as Carnillean armour, which players can keep as a reward using the drop trick.

In Carnillean Rising, the player creates a quest for Philipe to do, giving him confidence to become adventureous.

Members of the Carnillean family include:

And their staff, who live at the house:

This information has been compiled as part of the update history project. Some updates may not be included - see here for how to help out!
Retrieved from ‘https://runescape.wiki/w/Carnillean_family?oldid=35826794’
Categories:
Hidden categories: