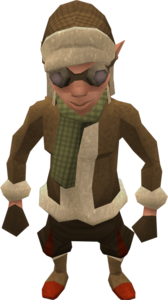 Captain Errdo is a Gnome pilot stationed at the top of the Grand Tree (Ta Quir Priw). A player may ride on his gnome glider to any of the other destinations.

He also can be found at two crashed gliders. Captain Errdo will take players to the glider east of Varrock (Lemanto Andra) but not to the one on Karamja west of the Shipyard's gate. He cannot transport players to the Grand Tree due to the gliders being wrecked.

He is also an easy customer of the Gnome Restaurant minigame, but he will only reward the player with coins and no other tips.

This information has been compiled as part of the update history project. Some updates may not be included - see here for how to help out!
Retrieved from ‘https://runescape.wiki/w/Captain_Errdo?oldid=35697529’
Categories:
Hidden categories: