From the RuneScape Wiki, the wiki for all things RuneScape
Jump to: navigation, search
Candy floss maul? (edit)

A candy floss maul is a fun weapon that could be found in a Supply cache during the Invasion of Falador, or from the Candy floss machine in the Spring Fayre.

Unlocking the weapon results in an in-game message: Sweet dreams are made of these! You've unlocked the candy floss maul.

When equipping it, an option to "Whack" other players will appear. Attempting to do so while the maul is sheathed will result in an error message of "You can't do that with the candy floss maul on your back!" 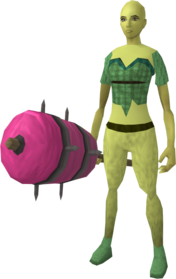