A player completing the random event.

Candlelight, also known as The Pious Pete random event, is a discontinued random event that was originally introduced on 20 February 2006. In it, the player was teleported to a chapel with a strange monk wandering around. The player had to talk to the monk, Pious Pete, and ask him what was wrong. Pious Pete responded that his candles always go out when he lit them, so he needed the player's help to light them. He would then give the player a lighter. 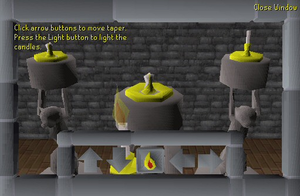 Once the player had the lighter, Pete told the player to light only the candles that are left standing, not the ones that are burnt down (he'd take care of those). There would be a screen with arrows to the left and the right, and a button in the middle. Once pressed, the player would light the candle (if it was an unlit candle). After all the candles were lit, the player would talk to Pious Pete and be teleported back to where they were with a small reward.

The event was notoriously difficult due to the vague instructions given, and the fact that candles would frequently extinguish before all could be lit. It could take some players hours or even days to complete, yet would only give a few hundred coins as a reward, making it deeply unpopular. While there were many reports of players getting the event from February until June 2006, it appears to have been quietly removed after this date, with the last confirmed occurrence on 2 June.

It is possible that the event was replaced by the Beekeeper event on 4 July 2006, which featured an almost identical interface, but this time did not force the player to try again if they failed.

Although the event had been disabled in June, its components remained in the game cache, and the event itself remained listed on the knowledge base. On 8 May 2007, the event was modified; the unpopular interface was deleted, while all the giant candles were given new left-click options of "Light". Presumably therefore, there were plans to bring back the event but with different mechanics. However, these failed to materialise and the event remained inaccessible.

With the random event update on 25 February 2009, the event was removed for good. Pious Pete and the taper were deleted from the game files, while the giant candles in the church were replaced by a stairway to heaven.

A particular of the Chapel.

The random event's former location can be seen using the orb of oculus. If you go to the north section of the Blast Furnace minigame and look north, you can see that it is also east of the Gravedigger event. It is also north-west of Eagles' Peak and south-east of Mort Myre Swamp.

There is a cage north-east of the chapel that contains a random familiar each time a player would be near it. This was shown in a glitch that allowed a player to walk out of the Cosmic Altar and end up here.

One theory could be that the cage keeps familiars that are "returned to the spirit plane" as when jumping down in a pool in Oo'glog to contain the familiar and stop its timer just to send it back to the player when they go out of the pool and start its timer again.