From the RuneScape Wiki, the wiki for all things RuneScape
(Redirected from Canafis)
Jump to: navigation, search
The Old School RuneScape Wiki also has an article on: osrsw:Canifis

Canifis is a village that lies to the east of Paterdomus, across the River Salve, in Morytania. It is the village of the werewolves and is accessible only to members.

Canifis features as one of the maps available in the minigame Heist. 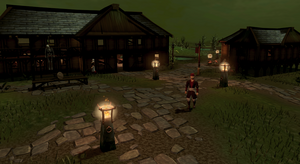 In the Second Age, the area around what is now Canifis was part of the god Zaros's empire and it was where the Zarosian fortress Kharyrll once stood. The kingdom to the south of it was known as Hallowvale with its capital city ruled by the Icyene.

As part of the Zarosian Extermination, Kharyrll was destroyed during the God Wars, but it is unknown whether Lord Drakan was responsible for this when he invaded Hallowvale with an army of vampyres. Whichever the case, the area would be part of Morytania from that point onward.

In the year 23 of the Fifth Age, a group of werewolves built a village named Canifis at the place where Kharyrll once stood, where they live today. Like all subjects in Morytania, they are forced to pay blood tithes to the vampyres, but the vampyres agree to take captured humans instead. 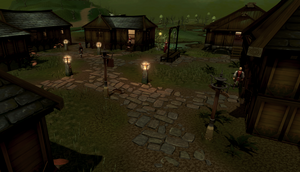 There is a bank in eastern Canifis. A notable feature about the bank is that there is a searchable crate in there, and if searched it can bear the message 'You search the crate but find nothing.' or 'You don't find anything interesting.' and can sometimes spawn a rat, spider, or chicken (the chicken "squawk"s and lays eggs while doing so). It is also known that any NPCs in the bank (excluding bankers) attack you when you search the crate.

Mazchna is a Slayer master, and is located in north-eastern Canifis. He will give assignments to any player with level 20 combat. His tasks are relatively easy, and are usually close to Canifis. 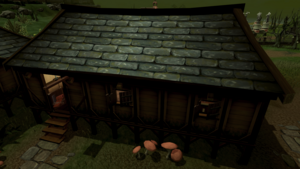 The clothes shop, Barker's Haberdashery, is in the northern part of the city. All items cost 650 coins each, except for the capes, which cost only 20 coins each. Coloured gloves and capes are tradeable to free-to-play players, but all other items are members only.

Sbott the tanner will tan cow hides or dragon hides for you. This is a great place for quick tanning, but because you are a human and he is a werewolf, and getting the supplies is "dangerous", he will charge more coins per cow/dragon hide.

The Taxidermist will stuff any monster heads or Big fish for a price. These stuffed items can be then used in a player-owned house. She is located in a house North West of the tavern. 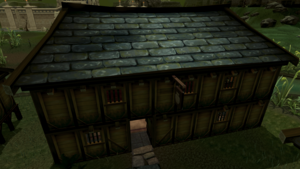 The general store in Canifis sells basic items as well as needles and thread. 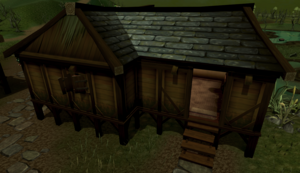 The raw meat shop lies to the north of the bank. It sells various raw meats and raw fish, up to raw sharks, but those can only be supplied by players.

Main article: Hair of the Dog

The Hair of the Dog tavern is owned by bartender Roavar, who will sell players a moonlight mead beer for 5 coins. There are also several quest-related NPCs in residence.

They are also attackable, though they are much more dangerous than they initially appear. In human form their combat level is only 28, but if attacked they turn into level 63 werewolves. Players can only prevent this transformation by attacking them with a wolfbane dagger which is a reward for the completion of Priest in Peril quest. or a Sunspear (melee) (or its magic or ranged variants) which is a reward from River of Blood.

The attackable inhabitants are:

Other non-player characters found in Canifis include:

The following music tracks are used in Canifis:

The following quests are started or are involved in Canifis: