The camel mask is a hat that can be made during and after the Enakhra's Lament quest, although it plays no role in the quest itself.

Players can make one by going to Enakhra's Temple, making their way to the Middle floor to the pedestal in the middle of the room, and simply using one piece of Soft clay on it to create the mask. (Players who own a charged Camulet or Cramulet will have a much shorter journey). There is no limit to how many masks you can own.

It gives no stat bonuses, and is merely for show. 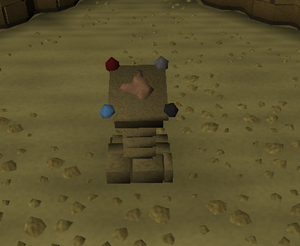 The Pedestal which makes the Camel mask when Soft clay is used on it.