Call of the Ancestors

From the RuneScape Wiki, the wiki for all things RuneScape
(Redirected from Call of The Ancestors)
Jump to: navigation, search
For the achievement, see Call of the Ancestors (achievement).

Call of the Ancestors is a quest involving the Goebies, including Acca Kanatah, Lunch, Peck, and Tunks. It takes place on Mazcab and is of Novice difficulty. Rewards include goebie-inspired outfit and weapon overrides, a Magic experience lamp, and three Raids loot reroll tokens.

The quest tells the story of a trio of Goebies trying to protect their village of Kanatah from the Airut invasion. However, when they head into the Nemi Forest to try and find more poison to weaken the airut, they get more than they bargained for.

This quest can be started by talking to Tunks, who is on the northern end of Tuska's back, which can be reached by talking to Wizard Chambers. Tunks explains his village, Kanatah on Mazcab, is under attack from Airut that have been left by Tuska. They are threatening to wipe out the entire village, and it seems the likely cause is the death of one of their chieftains.

After speaking to Tunks, head through the world window south of him to enter Mazcab. From there, travel to the village of Kanatah on the south-east side of the Goebie's homeworld and speak to Acca Kanatah. Acca explains that the scouts have spotted an amassing force of airut preparing to raze the village to the ground, noting also that this upcoming attack seems different to all the others they have witnessed. 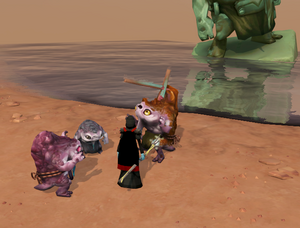 Lunch is impaled with a pickaxe.

Acca tasks you with seeking out Tunks and his friends, Peck and Lunch. They have been tasked with collecting wood for the village, and will require guidance. To get to them, head directly east from Acca, to the beach of the village. Once you're there, speak to Tunks.

In this section and throughout the quest, you will take control of multiple goebies. You can switch between them by clicking on the goebie you wish to switch to. 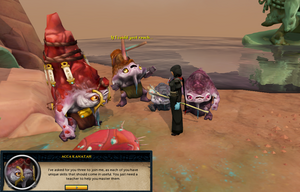 Acca arrives and explains that more wood is required to fix the village, but her predecessor has stored a good stock of supplies and hid them away from the airut. However, these supplies are hidden in a ruin of obstacles and bottomless pits. Lunch clears the way, and Tunks heads inside, causing you to take control of him. Jump over the chasm to the north and collect the bundle of logs. In the next room, use Lunch to headbutt the wall to break it, and then squeeze Peck through the small gap. Collect the bundle of logs.

After collecting the wood, talk to Acca again to receive your next task. The village needs help finding a way to defeat the airut, but Acca explains that while nemi poison could be a solution, it is not in great supply. You need to go to Nemi Forest and search for a source of poison.

Into the forest[edit | edit source] 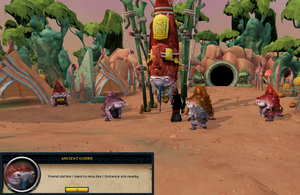 Meeting with the ancient goebie.

Nemi Forest is on the west side of the plane, past the slope towards the world window. Enter the area, choosing the first option when prompted to head into the quest's instanced version of the forest. Run a little north towards Tunks and his friends and you will trigger a short cutscene. Talk to the Ancient goebie. The group explains that you are there to find Poisonous nemi stalks, and that Kanatah is at the risk of being overrun by the airut. The Ancient Goebie is happy to provide you with the root, however you must first save his friend from the Temple to the north. Try to enter, and Lunch stops you, explaining the group needs to "look the part". 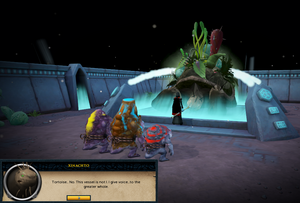 After another short cutscene, the trio reveals their change of appearance and you head inside. Talk to Xinachto, who looks like a giant tortoise. Xinachto explains he is a spirit guardian. When asking about the goebie trials, he replies that three young goebies must step forward and face the trials of their ancestors. According to Xianchto, you can not face the trials with them, as you are not a goebie.

Return to the group, who you'll relay this information to. Exit through the door to the west into another room, and you'll take control of the trio of goebies once more. 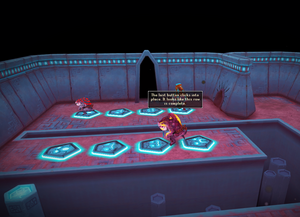 In the room, there are 4 pressure plates on each side of a chasm and a cracked wall in the south-west.

Use Lunch to headbutt the cracked wall on the south-west side of the room, and then Peck to squeeze through. Walk around the room to the northern side. Read the glyphs to reveal the order of the pressure plates that Lunch and Tunks must stand on.

From left to right on the southern side of the room, use Lunch to step on the 2nd, 3rd, 4th, and then 1st pressure plates (in that order) to complete that row. Be careful not to walk over any already activated plates when heading back to the 1st plate, as it will reset the puzzle.

You need to use Tunks to cross the chasm, as he is the most agile. Now, from left to right, step on the 4th, 3rd, 1st, and 2nd pressure plates.

Use Peck to investigate the magic at the north-east to complete the first trial.

Exit the room while in control of any goebie and the rest will follow. The east room is now unlocked, initiating the second trial. Enter the east room. 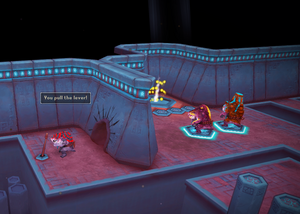 Leave the room the way you came. You can now head into the northern room, where the third trial awaits.

For the instructions within this section, Lunch needs to be placed in the correct positions after Tunks. You can pull the lever as many times as you want to reveal the tiles. Pulling the lever is not required to correctly activate the tiles with Tunks and Lunch if you'd rather just use the walkthrough below. 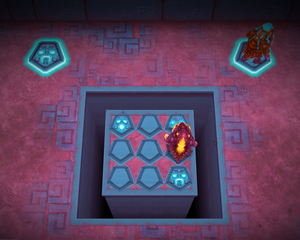 This room is a bit more complex than the previous two. Use Lunch to headbutt the south-western wall, and send Peck through to pull the lever. You will now use Tunks to stand on a small tile in the centre and Lunch to stand on its corresponding larger tile in the outer area.

After pulling the lever one pressure plate will flip in the middle.

This time, two pressure plates are flipped in the middle. Using the same technique as earlier, just do both of them one at a time.

This time, three pressure plates are flipped in the middle.

This time, four pressure plates are flipped in the middle.

Leave the room the way you came in.

Upon leaving the room, you and the trio will speak to Xinachto again, who explains that he is dying. Lunch, not wanting Xinachto to die, breaks his shackles, freeing him. Leave the main chamber out of the southern door to return to the Ancient Goebie. As you explain the situation, it reveals the airut are coming and the goebies prepare to make a stand.

For this part, you can click on the ground where you want the trio to attack. You will need to fend off the attackers using this method. If the trio all become injured twice, you will have to speak to the Ancient Goebie again to restart. The goebies restore health over time with "I'm feeling a bit better now." 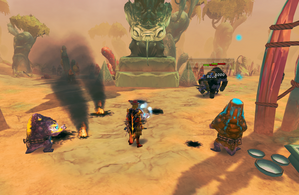 Fighting back the Airut ambush.

The chargers take one click to kill, while the actual airuts take two and Tuz can survive 5 hits (4000-5000 Magic damage is dealt per goebie attack).

The third wave now consists of everything in the last two waves, this time also including Tuz and ranged airut, which can overwhelm the three even faster with their ranged attacks.

As the monsters will spawn out of their attack range but not out of yours, angle your screen facing south and zoomed out so you can spam-click ahead of the monsters before they hurt the trio. For greatest convenience, you may allow your wave to fail the first attempt to identify what side the monsters spawn, then on second attempt spam-click those spawn locations.

As you progress through the waves, your progress is saved and you will continue from that wave when you retry.

After the three waves are complete, speak to the Ancient Goebie to receive the Poisonous nemi stalks. Return to Acca back in Kanatah whichever way you see fit. Acca will thank you for helping the village, and reward you. 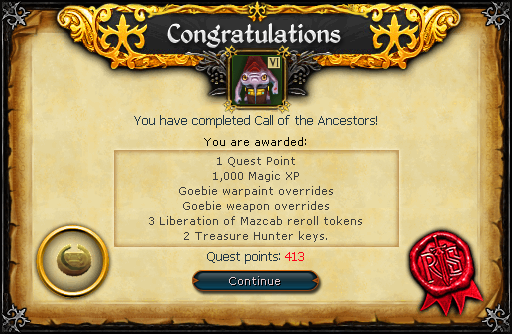 Call of the Ancestors is not currently required for any quests or miniquests.